So I'll just post this real quick. We had fun at Antiques Roadshow. This time we DID have to stand in a couple of LONG LINES . The event was organized pretty much the same as the last time we went in Madison, WI. When you approach the area for appraisals you get a ticket to go to that area of expertise.
SO for the belt buckle that once belonged to Hub's Dad, we were sent to the Tribal  Art table which included western art...sounds wacky but that was it. So we only had two people in line ahead of us, and we spoke with a knowledgeable fella, he punched our ticket and told us that this buckle was a trophy buckle and they are collectible and he'd never seen one with short horns like this, so it may be slightly more valuable, he estimated it tat $200 to possibly up to $500.   COOL! 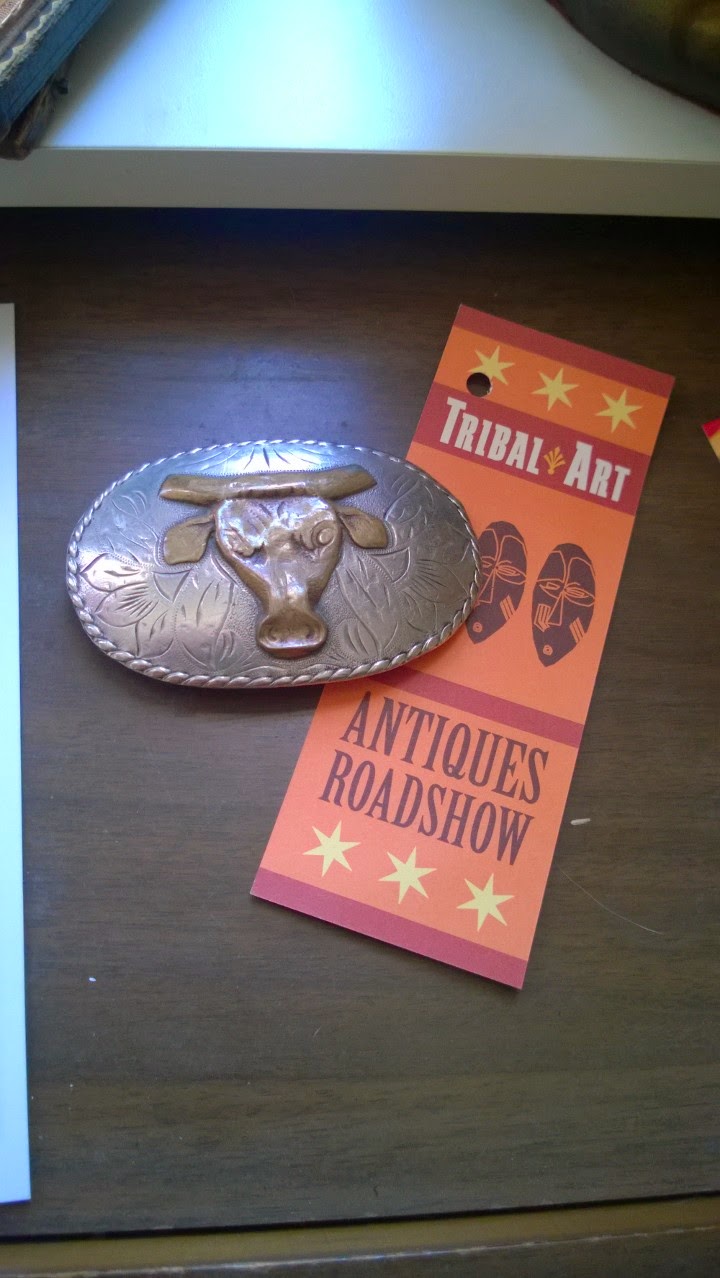 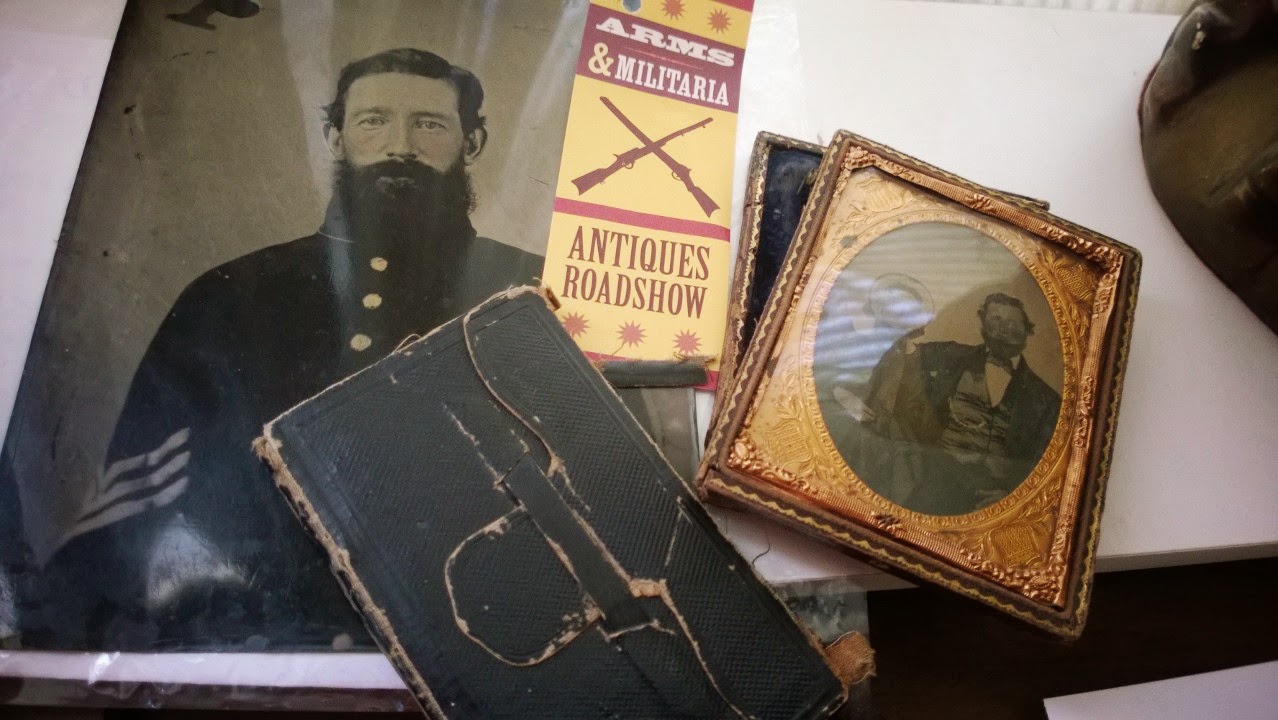 So we go on to the next place the
one for the civil war journal and tintype photo. That was at the Arms & Militaria table. Again we only had a couple of people ahead of us! I was pretty thrilled to have Rafael Eledge appraise our items! We always like his spots on the show. Anyways he looked through the journal and I told him the dates there and the discharge paper that we had. He said the journal was in pretty bad shape, but was interesting listing folks who died or where discharged and he said he would value it at about $200.  I asked if he had a guess about what some of the figuers in the book were and he said he guessed poker or card game winnings, since the date on the journal was March 17,1863 and he was discharged on March 27,1863.  We speculate that this journal was helping him pass the time in the hospital. Mr. Eledge also valued the tintype picture at around $200 also. He said it was not an original photo, but was printed on the tin from another original, Like the original in the gold frame we had.  He said  that's why you can see the nail on the top left edge of the picture-the photographer took a picture of a picture nailed to the wall! So we moved on to our next item the lamp. 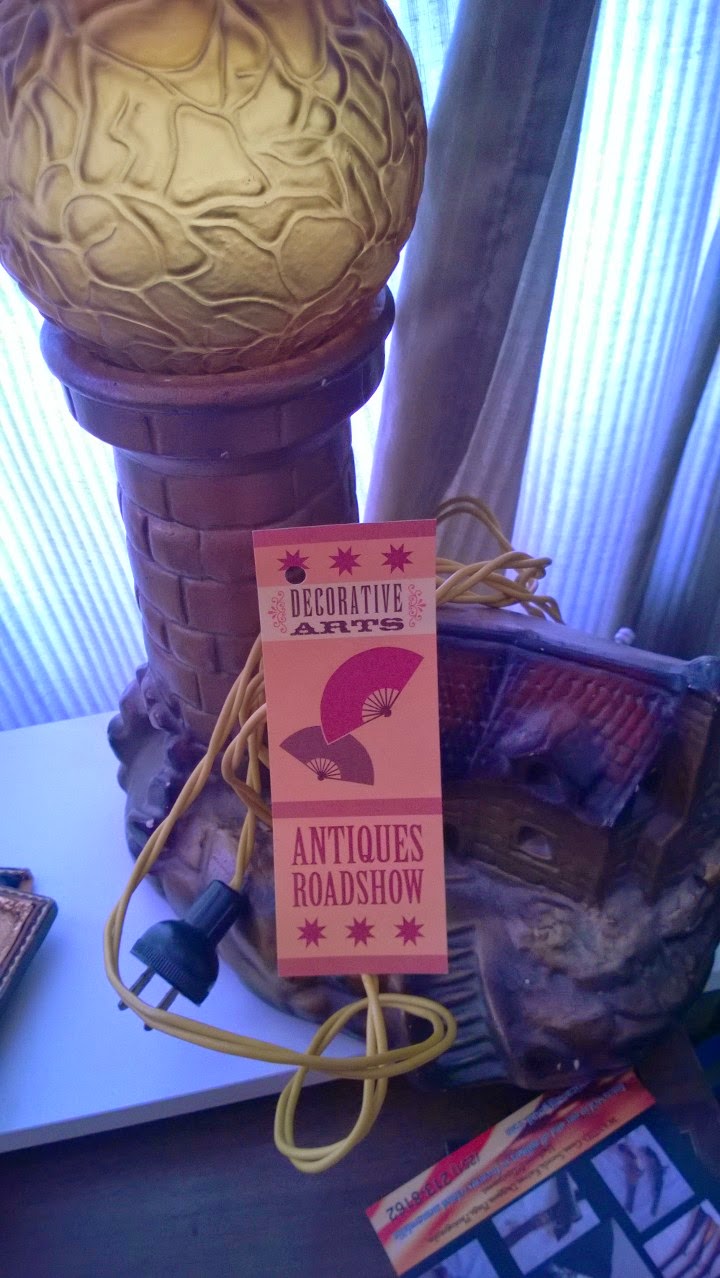 The line for Decorative arts was pretty long.
We waited a little over an hour in line there. The time goes pretty fast if you chat with the folks you are in line with. We met a lot of very nice people, with everything from a door knob possibly from the Chicago Board of Trade, a lady with a diamond ring from the 1800's, a guy with a collection of police billy clubs-learned a lot about those things! and just so many interesting things that I'd never seen before. DD and I chuckled to our selves sometimes when we'd see some one walk by with an item we'd seen before somewhere and appraise it our selves! Anyway we fianlly got our turn and our appraiser was Wes Cowen! WOW! I was pretty thrilled, we love him on History Dectectives as well as the Roadshow. DD plunked the lamp on the table and told him this was the ugliest lamp in the world, he said oh no it's not the ugliest, there are plenty that are uglier that his one! Perhaps a lighthouse collector could be interested in this one and he wondered if the globe was original-probably not-and he said well, $25 would be a fair price for the lamp. We had such fun with that appraisal!
So we only had my stick left to get appraised. 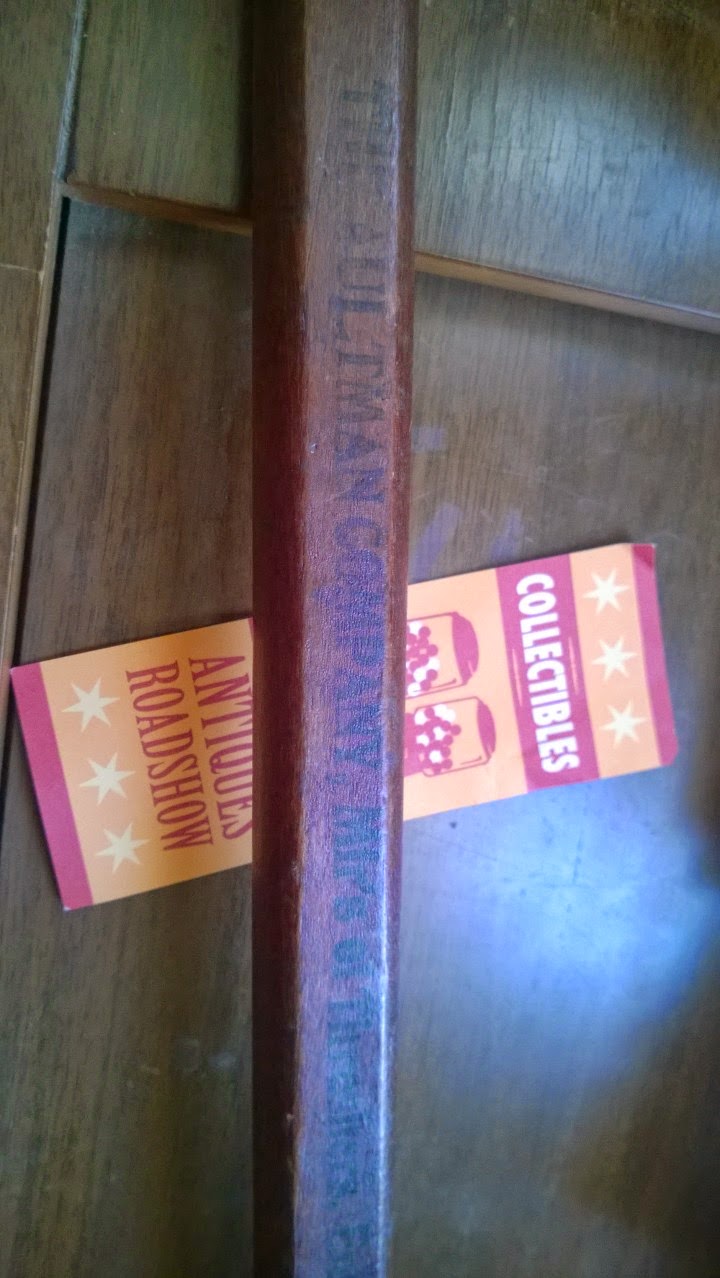 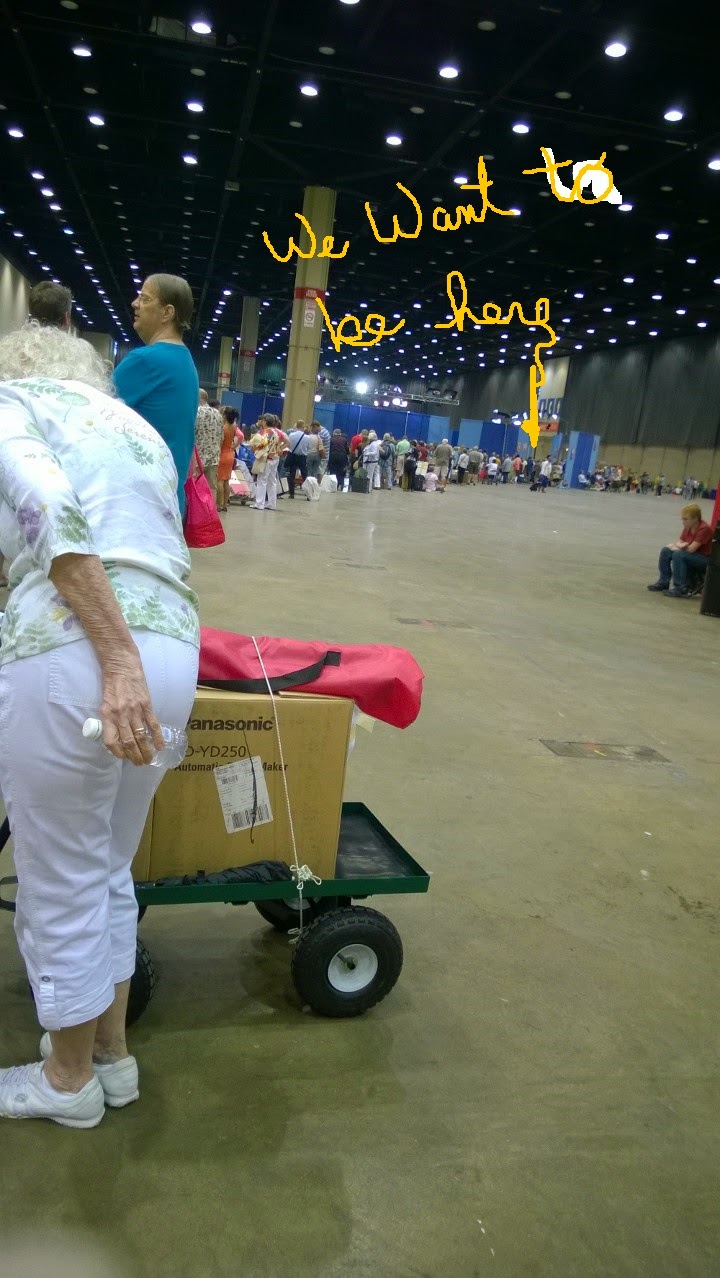 Yes this line was HUGE!
We got inline and chatted a little bit, but I think everyone was kind of tired of talking about their stuff by then, we were sure wore out since we had hiked all over the Soldier Field/lakefront/museum section of Chicago. 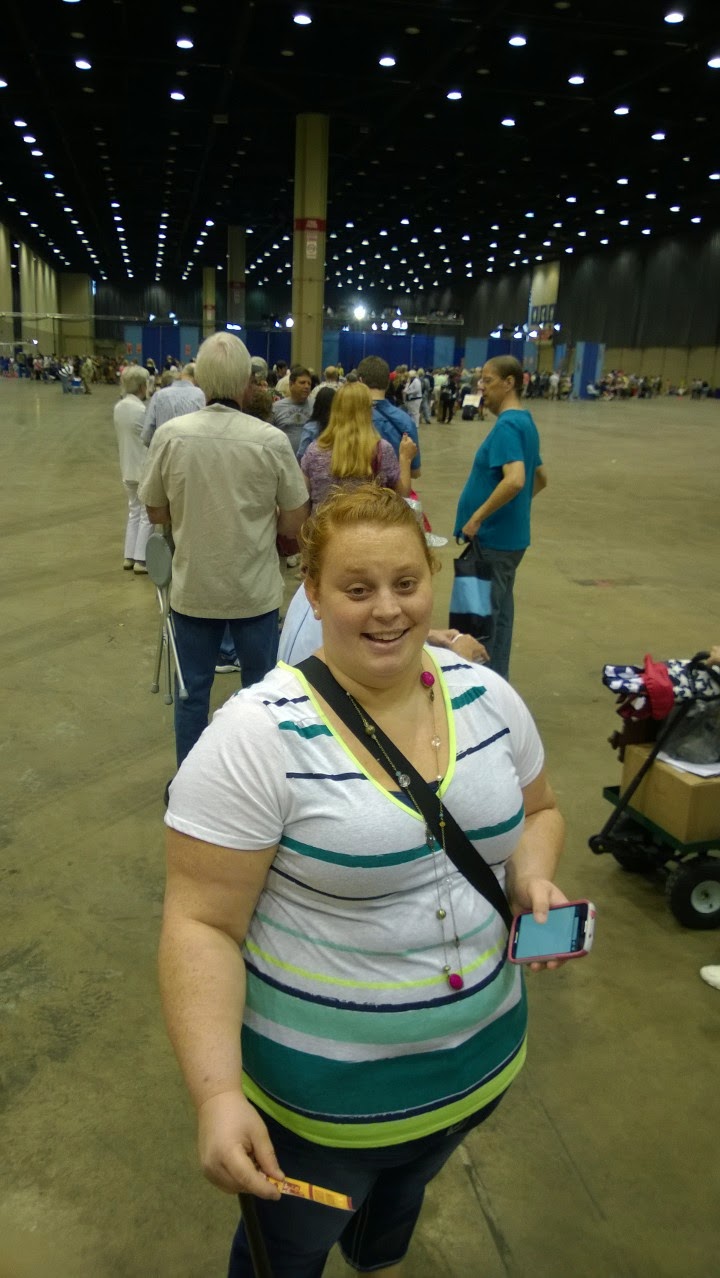 It was 3 o'clock, we had been inside the McCormick Center since 11:30am. I looked at DD and said, so what do you think? We waited about and hour, and the line moved a little bit, not fast at all, I told DD I'm Ok with what we got done, I'm OK with what a lady standing in line told me about my stick. She has an Antique shop in Michigan, and she told me that my stick was actually a measuring stick that a person would use to measure how much fuel was in a gas tank. I told her, that I had worked in a convenience store and they fuel guys still used a long stick to measure how much was in the underground tanks then, a lot longer stick but, the same idea. Anyways, I still don't know how much the stick is worth, but I like it and I guess it's good enough to know what it is, at least what it might be!LOL! 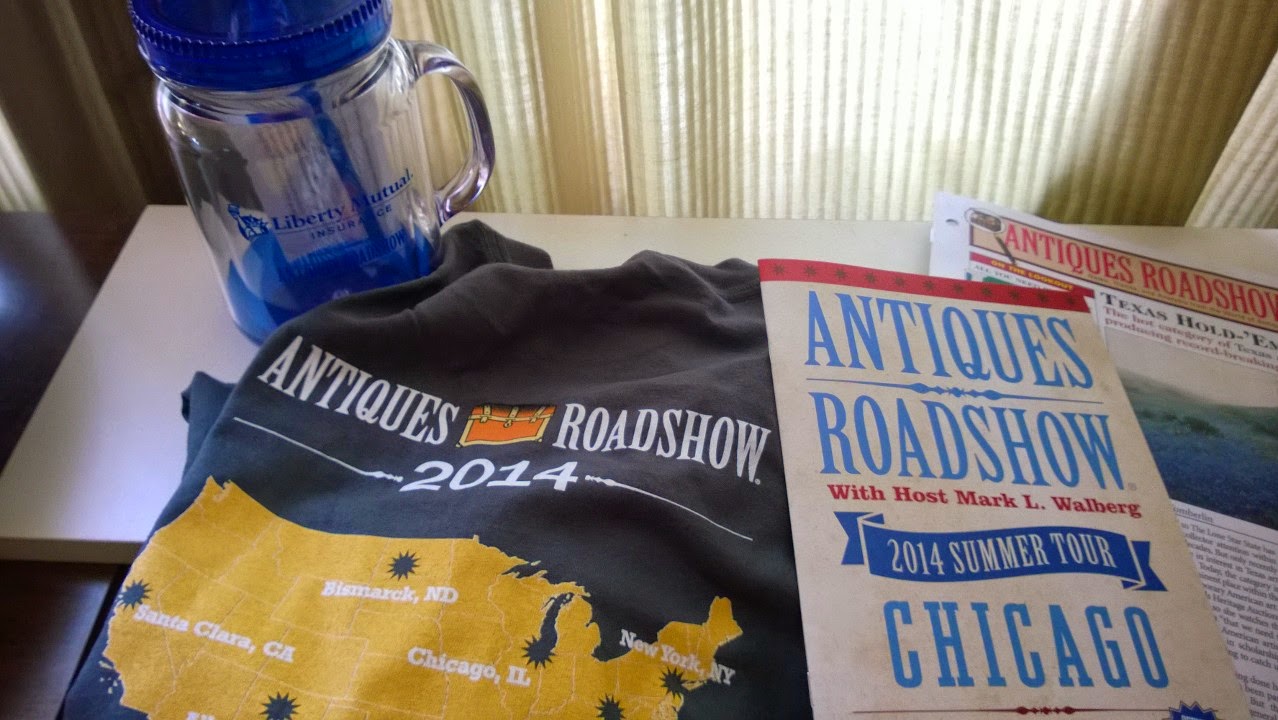 As we were leaving we stopped by the table for Liberty Mutual and won a couple of prizes-a T shirt and a to go drinking mug! Hey it was a great day, and we were bushed! Time to hit the road and go home!


Posted by knuckstermom at 4:09 PM