So on Thanksgiving Thursday, my washing machine stopped starting. Well, you know it would run water in but then just sit there. I knew my lid switch was getting worn out-I had to press hard on the lid in just the right place to make it work...but now it was a goner.
So I Googled, "How to fix washing machine lid switch" and it seems this is a common problem. And that almost all brands of top loaders-especially those who have an almost vintage age-use the same switch set up. I chose a few youtube videos to see how they took the thing apart. 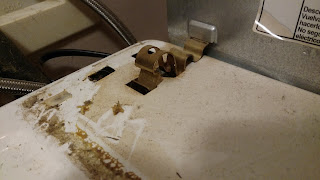 There are little screws and a cover and then these big clips....I knew I would struggle to remember how to put them back in when I was through so I took a few extra pictures. 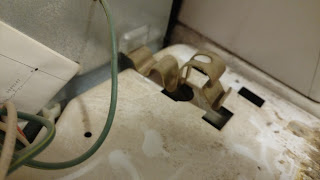 Man! It's dirty in this washing machine! See my washing machine is full of wet laundry! But I was fearless and took it apart anyway! The whole front tips off when those clips are removed. 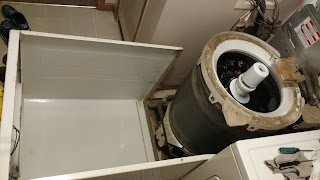 Anyways, one of the youtube videos told how to use a ziptie to repair the switch, so I thought I'd give that a try, since it was a holiday and I sure wasn't going to get a part today! 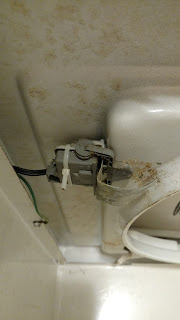 Here's the switch on the underside of the top of the machine. I used a ziptie like the video said-I didn't even remove the switch, I just pulled the ziptie as tight as a could with pliers- and then tipped the front back into place to give it a try....and it WORKED!!! YAY! The laundry went great! Then it was on to Amazon to order a new part! 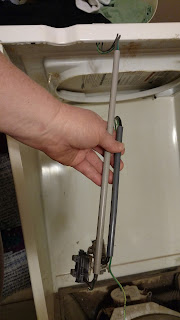 So the part came today!It was almost just like the original, except it had a longer cord protector piece of plastic covering-I had to cut that off-see it has a slit all the way down the hard plastic so I pulled out the wires and chopped that excess plastic off. Now it will fit around the corner of the washer. 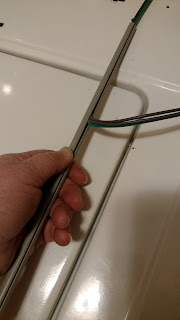 The other thing the new part didn't have was this metal protector part. I just popped it off of my old part and slid it onto the new part. 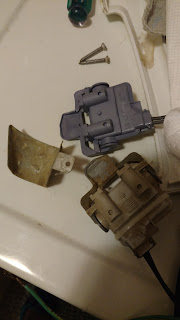 And of course there's always one thing that's annoying-the ground wire uses a hex head screw instead of a slotted screw so I had to go hunt down a wrench for that. I sure hope that saved Kenmore a nickle. 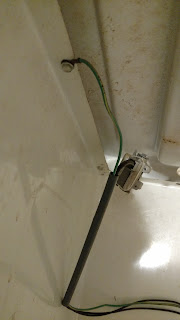 Now that I have the old switch out, you can see how it broke right between the light gray top and the dark gray bottom, with the ziptie pressing it back together again. It probably would have continued to work for quite awhile, but the new part was only about $7 on Amazon, so I thought I should go ahead and replace it. 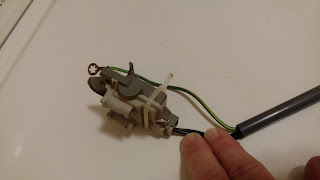 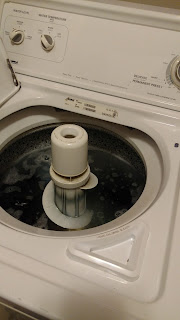 There! All cleaned up and re assembled! And a test batch ready to go.... 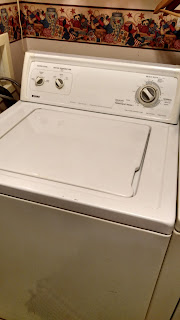 And we're agitating! YAY! This wasn't a hard fix at all-the hardest part is to put it back together again and taking pictures made that really easy too! So glad this is fixed!!

Posted by knuckstermom at 10:04 AM

Looks all too familiar. Glad everything is back in business.