I just realized I forgot to share my favorite photo I took in Hannibal, Missouri. 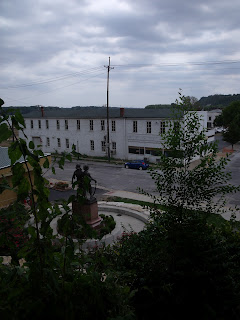 See I hiked up about a million steps to the top of where the bridge used to be and then you can look down and see the Tom  and Huck Statue. Look WAAAAAY down there, parked at the curb. Yup, there's hubs in the air conditioned car waiting patiently for me to take pictures for my blog.
I sure hope this picture is right side up when I post this!
Then if you drive down a little bitty alley along the river bank, you'll see folks live in these cool old houses and this ones side-yard is what used to be under the bridge. It's kind of like looking at the back side of the tourist areas. 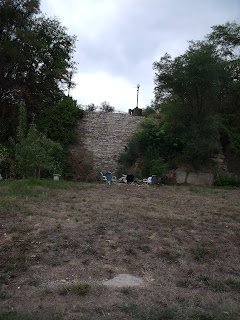 This plaque tells the milestones of the bridge that isn't there anymore. It was dedicated in 1936 and demolished in 2001 after flooding damaged it and it was replaced by a new bridge further upstream. 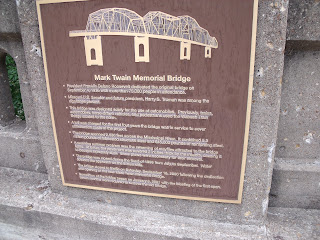 Posted by knuckstermom at 9:54 PM