So I've been having problems getting my phone to save pictures that I take. I THOUGHT I had pictures of the Kerenels ball game, but...nope. I THOUGHT I had pictures of the drive in...NOPE! DARN IT!!! On Line forums suggest downloading a new camera app, guess, I'll try that.
But anyways Hubs and I went to the drive in last night over in Newton, Iowa. The Valle Drive In shows a double feature. last night we saw Superman, Man of Steel and Star Trek Into Darkeness. I really liked them both. 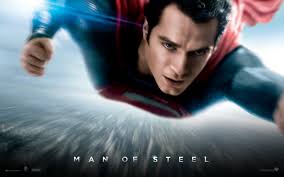 Superman could have been about 10 minutes shorter, I got a little tired of things falling from the sky and destroying Metropolis. At any rate the guy who plays superman is very good and very attractive...oh my. I have to share this video...I work for P&G, remember? Well Gillette-one of P&G's brands, has the answer to the burning question, How Does Superman Shave?

Believe it or not here is more to the How Does the man of Steel Shave promotion. Moving on.....
Henry Cavill, he does a wonderful job acting the part of Clark Kent and looks good doing it. besides, you gotta love superman who has a dog. Spoiler alert...there's a really awesome scene near the end with Clark as a child playing with his dog in the Kansas sunshine... So I recommend seeing The man of Steel.
On to Star Trek 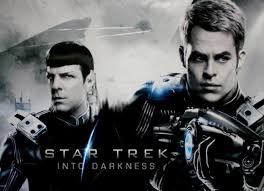 So, it was like a comic geeks double feature. I really like this installment of the Star Trek saga too. It was kind of hard to adjust to younger versions of beloved Captain Kirk, Spock, Bones and the rest of the crew. But I thought it was really well cast and the dialog was really fun, as younger versions of our old favorites. The movie was poorly edited...I'm no expert but when Mr. Sulu is at the helm and commands  the bad guys (no spoiler here!) that he will destroy them if they don't reply in 2 minutes and at the same time the landing party is heading for the soon-to-be-destroyed place with and eta of 3 minutes...well call me silly, but oopsy! Also there is one scene that kind of makes me batty, Alice Eve, a lovely young lady plays Carol, a science team member who is preparing to disarm a weapon, and has to undress to change into coveralls, with Captain Kirk there...of course. The bra & panty shot is not risque' but totally unnecessary and silly. 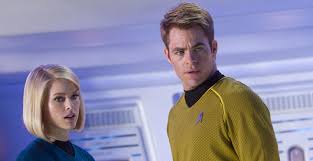 I'm also not sure about Spock's romantic interest (no spoiler here either!) but I guess it works with the dialog.The other scene that could have been shorted a bit in my opinion was the Spock/bad guy (See, no spoiler) fight aboard some flying machine. Too long and kind of not in character to my way of thinking. Again I kind of got tired of things falling from the sky to destroy various places on earth, but not too bad.
I'd see it again because there are far too many plot twists, which will keep hard core Trekkies busy for a while, to keep track of  for those of us who aren't looking for discrepancies.
And one last plus for the production company, they support the service organization, The Mission Continues.  The Mission Continues is a service organization dedicated to helping Post 9-11 veterans find their way in today's world.  The book, written by the founder, Eric Greiten, The Heart & The Fist, was a real winner with me and the organization is a veterans helping veterans organization. 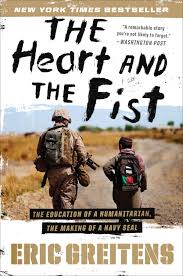 So good on you Star Trek folks for supporting The Mission Continues!

Posted by knuckstermom at 1:20 PM

Email ThisBlogThis!Share to TwitterShare to FacebookShare to Pinterest
Labels: Drive in movies, Star Trek Into Darkness, Superman Man of Steel, The Mission Continues.