So Darling Daughter and I went on a little vacation to The wonderful world of my cousin Robin in Minneapolis. I just love the big city! It's always such fun to spend time with my wonderful cousin! 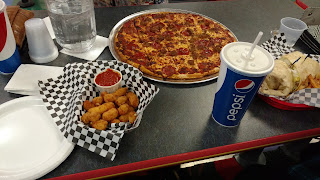 There was bowling involved...not me! Robin had a tournament to bowl, DD and me just had snacks....It was a really nice bowling alley-clean and bright 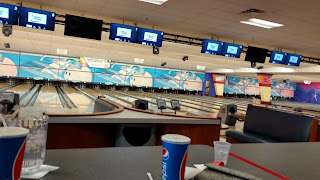 Look at the cute Formica table tops! So adorable! 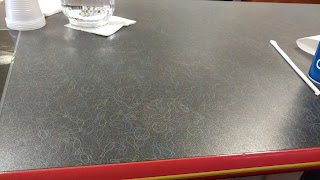 There was a stop at the Mall of America ...of course....Lego Land

And see those pretty blue handbags in the Micheal Kors Store? Lots of stores had that cobalt blue in handbags-I need to go find a less pricey version though!

I'm always slightly in awe of the mall. There are a lot of things that are the same as any mall anywhere, but there's just so much  here all at once!

We stopped in at Crayola-I love that crayon smell!

Sesame Street was at the pop-up stage in the center of the mall.

And we went to the aquarium. We took the tour that let us go behind the scenes and we could see the view from ABOVE the tunnel!

It was such a good visit!

We stopped off at the brand new Hy Vee to pick up a few things....and look they have a clothing store INSIDE the HyVEE!!!!!!They have kids clothes and adult clothes-an exclusive line from Europe!

Of course we had to eat out...We had a little bit of everything -we had a burger at the Lucky 13, and we had Mexican late one night and we also had lunch a the Rainforest Cafe at the Mall.
Robin treated us to a special dinner at the local Steakhouse-Axel's.

I can't ever remember getting a popover to start the meal before!

And the food was so good! Such a great meal!

And we split a delicious slice of cheese cake in honor of DD's birthday!

We also made a stop at the SR Harris fabric warehouse in Brooklyn Park...I could spend a lot of money here if I wasn't careful!!

I did pick up a few zippers and got a couple of bits of fabric.

We also stopped at the location in Burnsville on the way home....

Well, it seemed shameful to drive on by!

And we took the opportunity to go to the movies! We saw Hidden Figures. It was a great movie! I just wanted to clap my hands when Kevin Costner's character, Mr Harrison says "Here at NASA we all pee the same color."! Go see it-you'll want to cheer too!

Posted by knuckstermom at 10:34 PM