So the one place on my list of places to eat that I thought we should not miss was called Bailey's Range. It is located in downtown St. Louis, which made my Hubs cranky...Downtown is not his kind of town. Anyways I made him come in. 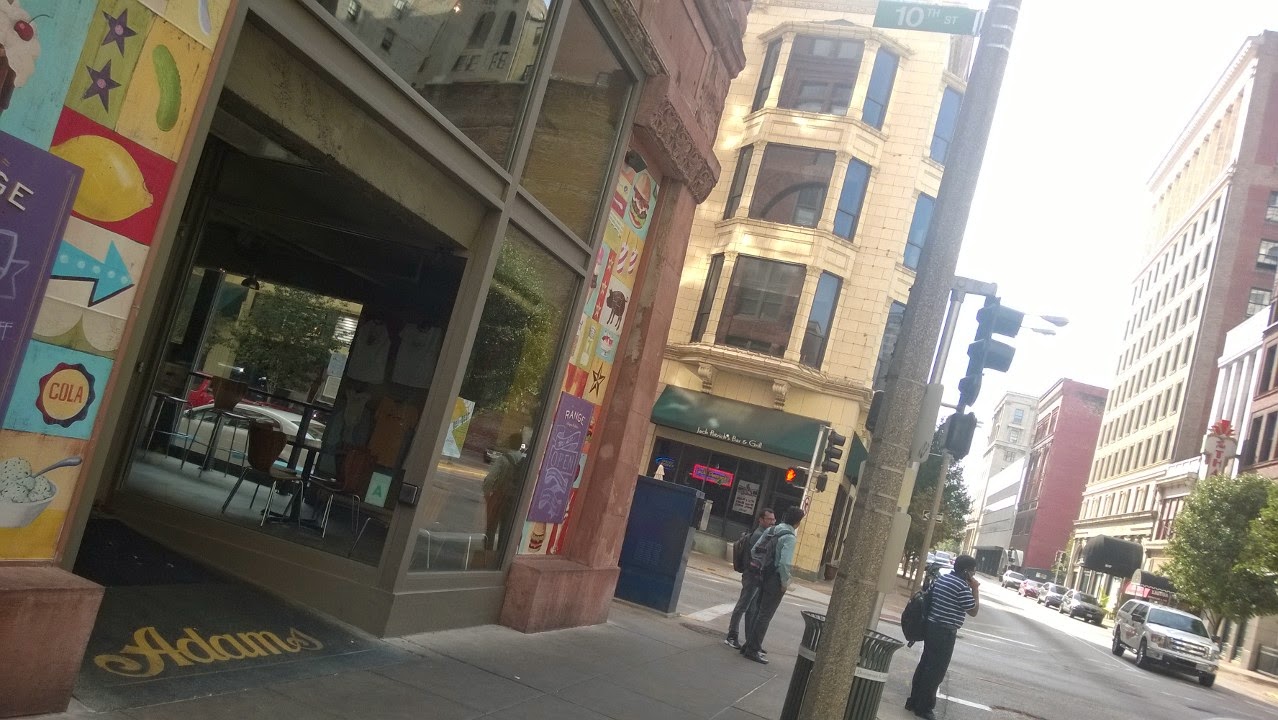 Range is in a classic old downtown building and has the greatest eclectic/shabby chic/modern/cool decor! 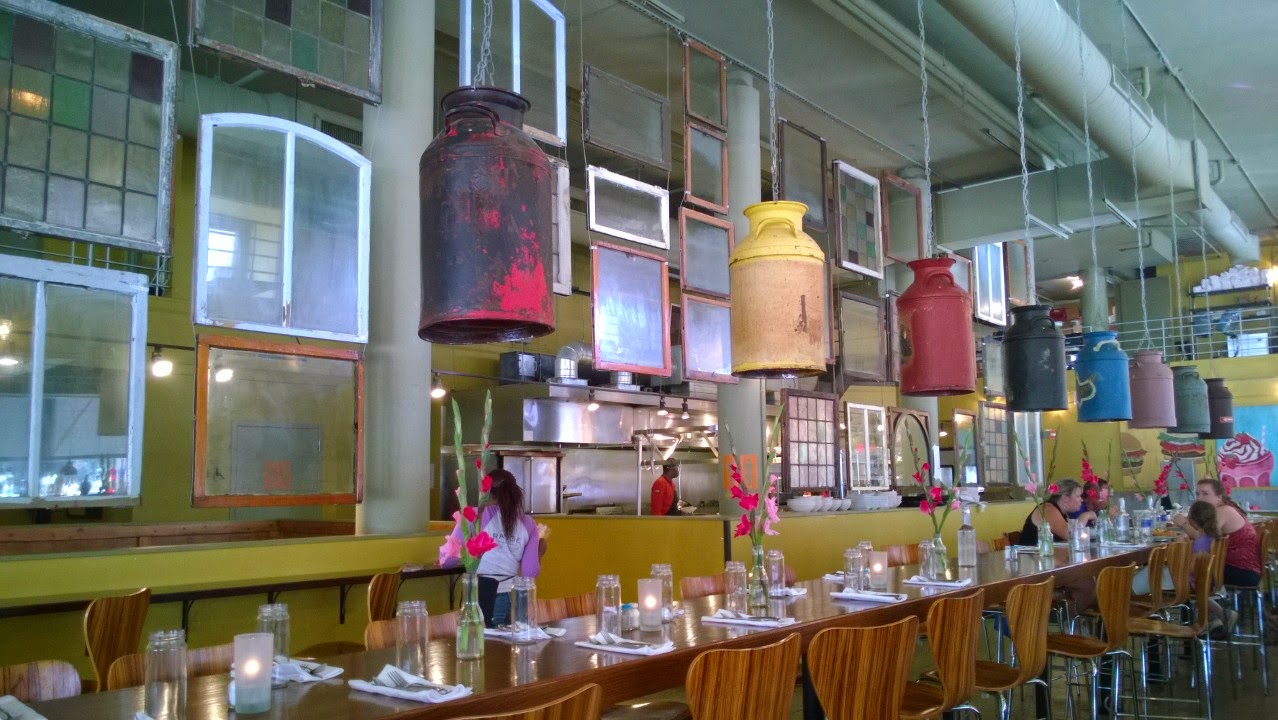 Look those milk cans with the bottoms cut out are the lighting fixtures, and behind that you can see the random old window panes hanging. The windows for a kind of non-divider-divider between the dining area and the kitchen. The center of the room is a long dining table where you can be seated. We chose to sit at the counter/bar. 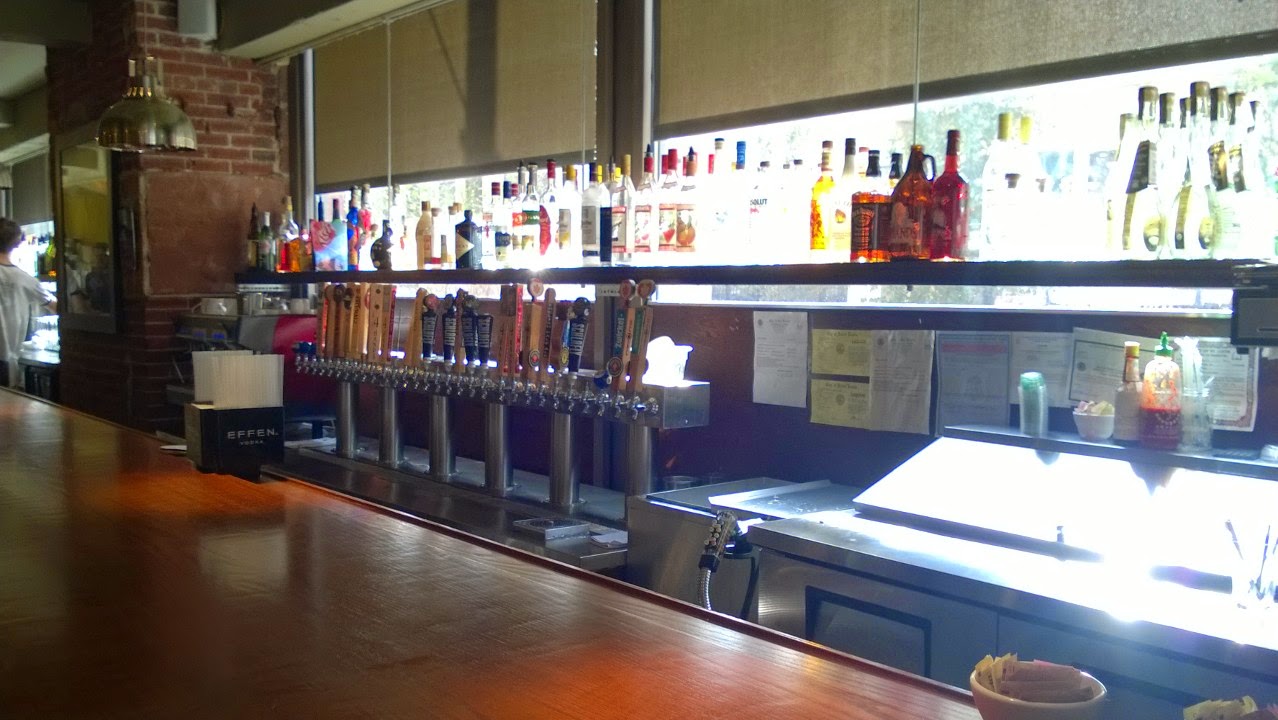 Range serves dozens of kind of Beer, on tap, in bottles all kinds and most of it is of the trendy micro brewery type. But they also have all kinds of favorites in bottles too. 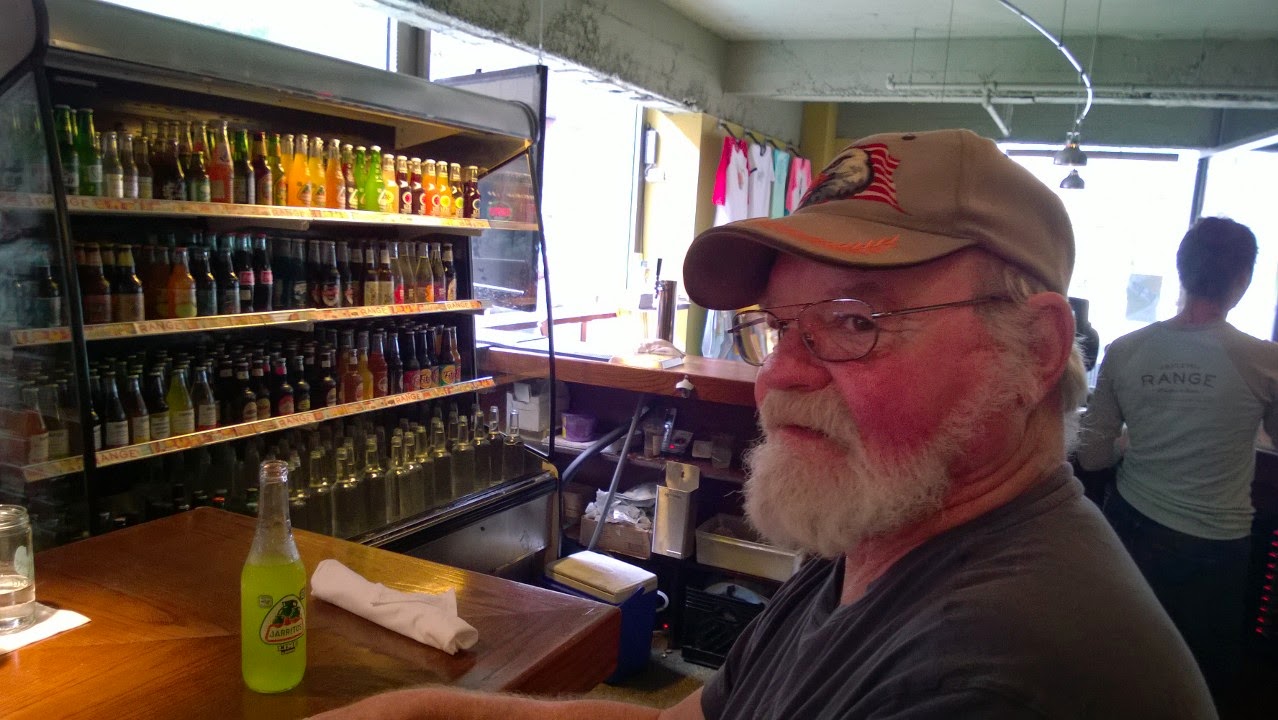 Here's Grumpy Cat...Oh I mean Hubs, see those bottle behind him? Those are all the kinds of soda pop they have in bottles to choose from. WOW! Plus they have their own brewed root beer and other beverages on tap. 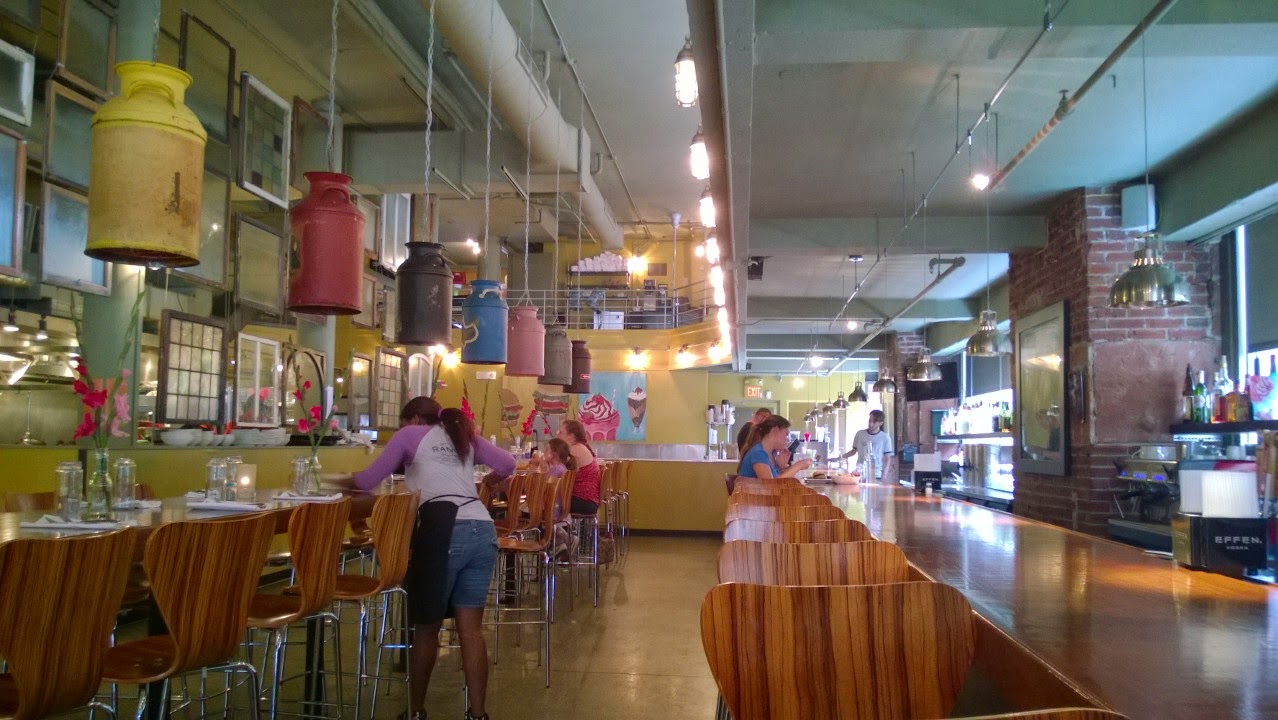 I loved the look of this restaurant the minute I walked through the door. 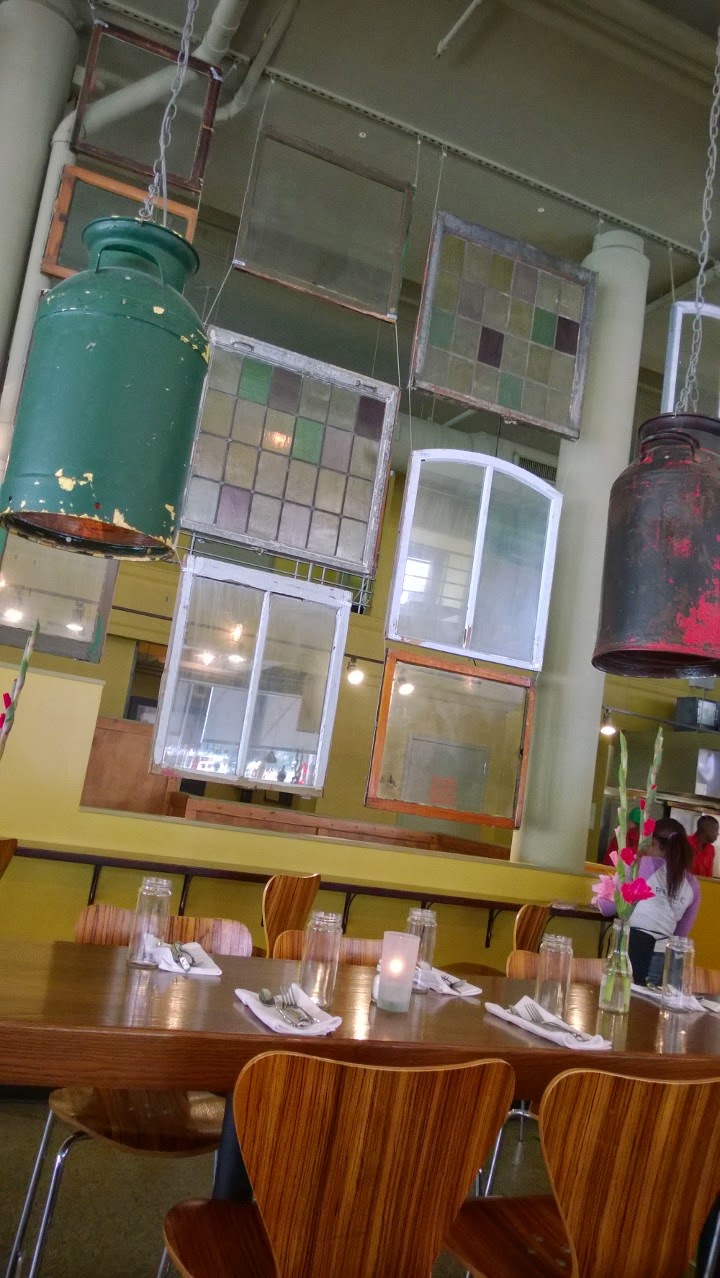 There's also an upper balcony you can sit at too. We didn't go up there though. 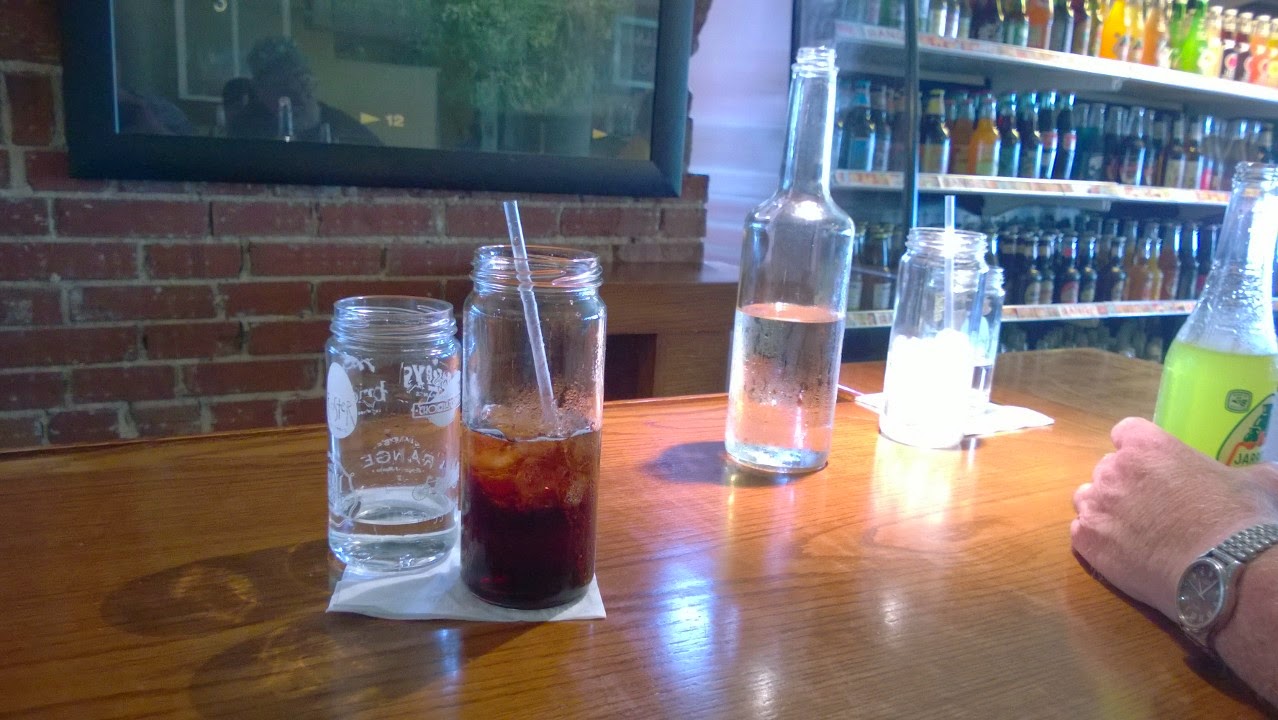 I had the Range Root Beer, they serve beverages in jars and bottles, the water came to us in a tall clear glass bottle and the drinking glasses are all jars. Some of the jars advertise Range seasonal beers. Pretty clever marketing because I bet folks steal the glasses all the time! 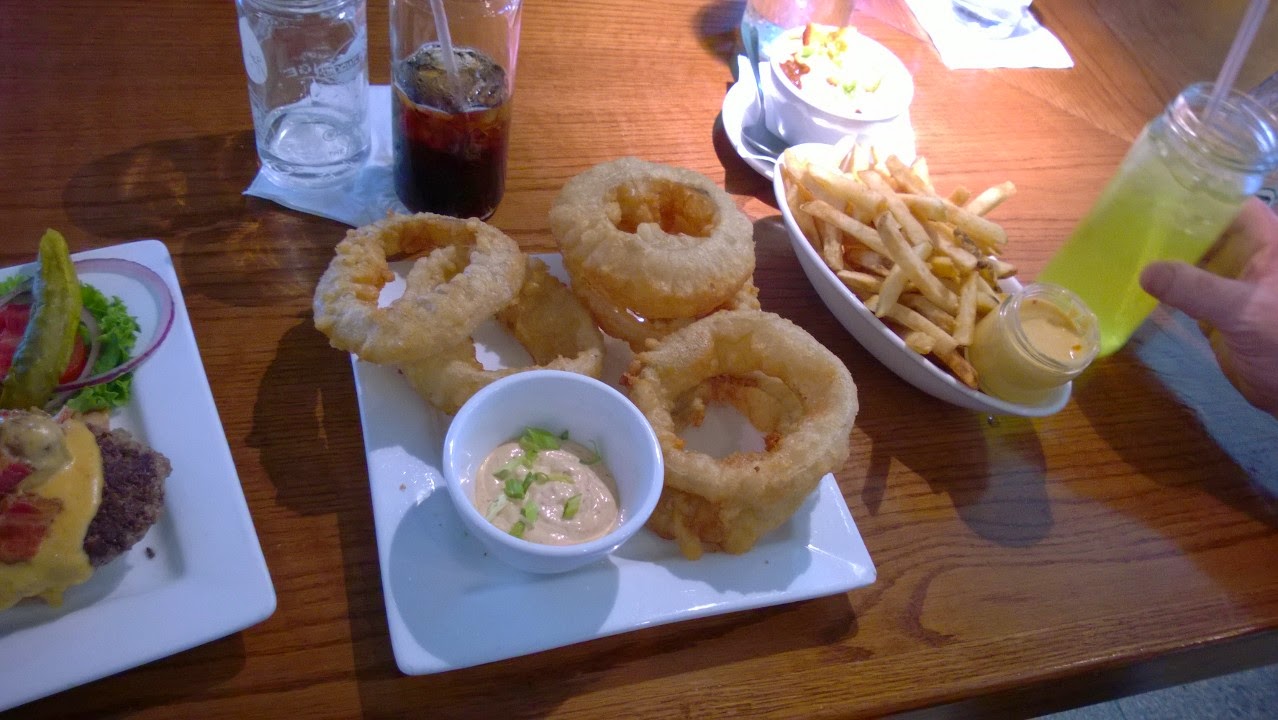 SO We ordered a side of onion rings....just look at them.... they were delicious. They came with a little jar of chipotle mayo to dip them in, but of course I had to have ketchup, and they MAKE THEIR OWN KETCHUP.  I ordered the American burger, Hubs ordered a cup of chili and a side of fries. He said his chili was the BEST HE'S EVER HAD! WHAT????? Well, I'm glad grumpy cat didn't want to come here right? 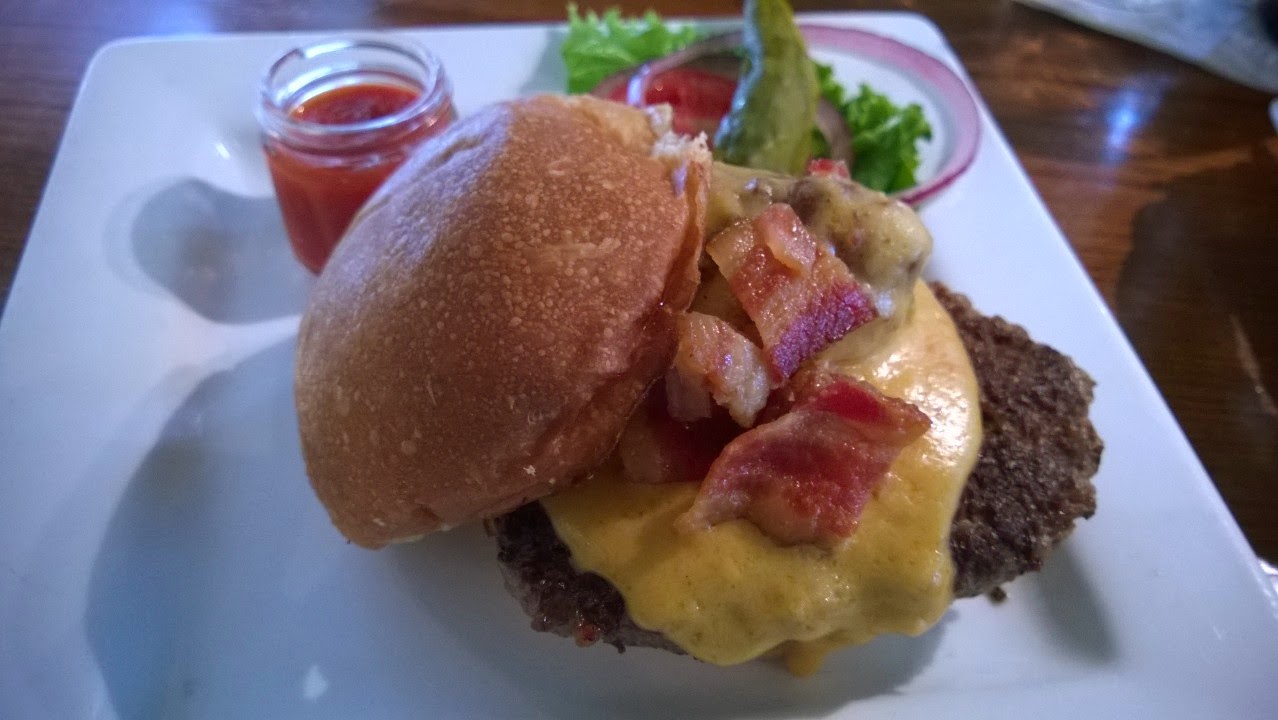 Here's my American burger. I have to say this was very likely the BEST burger I've ever had, the meat was delicious, it is advertised as 100% grass fed Missouri raised beef and I  loved it. The American burger comes with a glob of fried macaroni and cheese on top and it was such a delicious little bite! OH My! 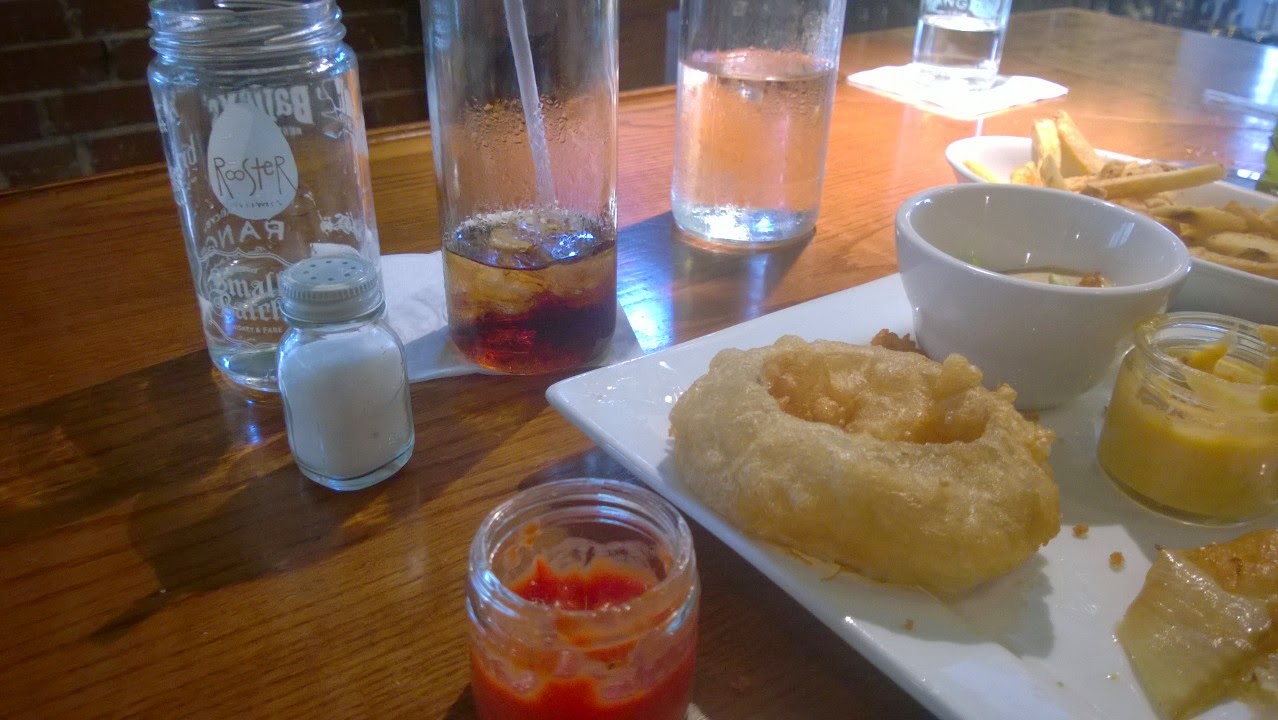 Anyways we slurped up all this Delicious food and headed for the hotel.
Now the only other restaurant we went to in St Louis  was a diner.  On Friday we took the time to go to the White Knight Diner. 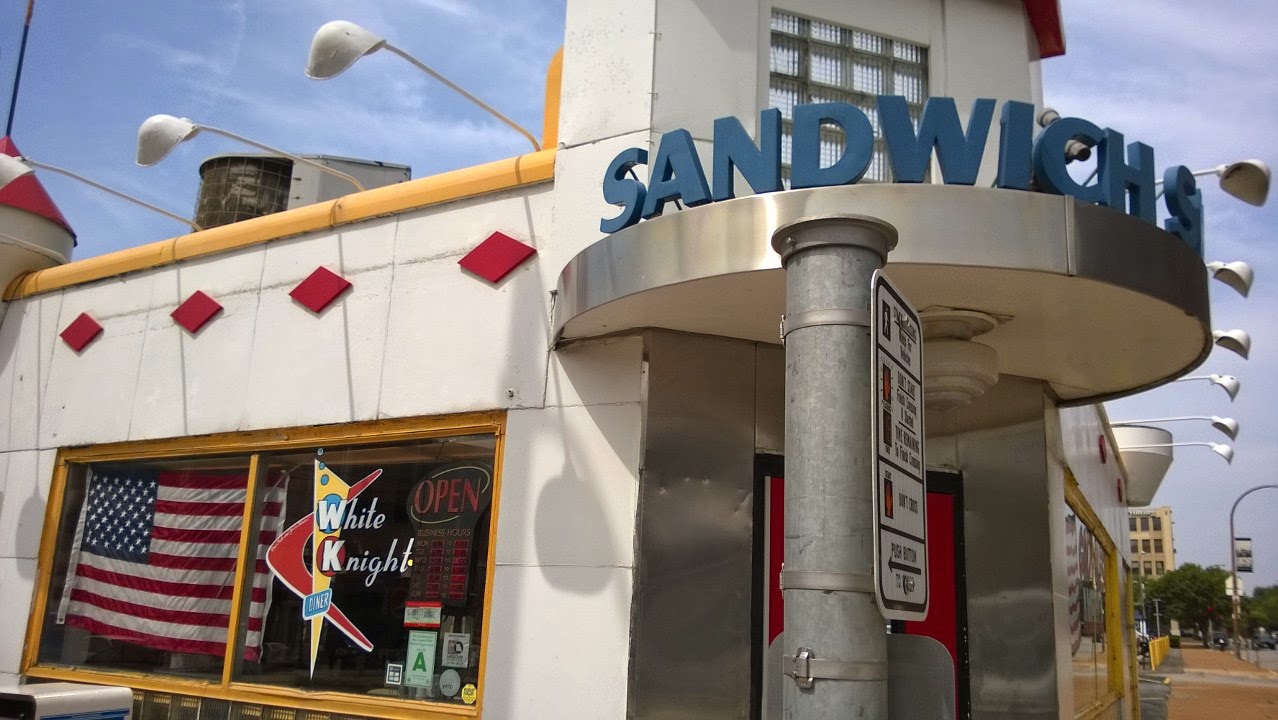 It's an old fashioned, old school, back in the day, kind of diner. That outside decor isn't retro-it's original. It probably seats 15 people, and sits on a corner in old downtown St. Louis. 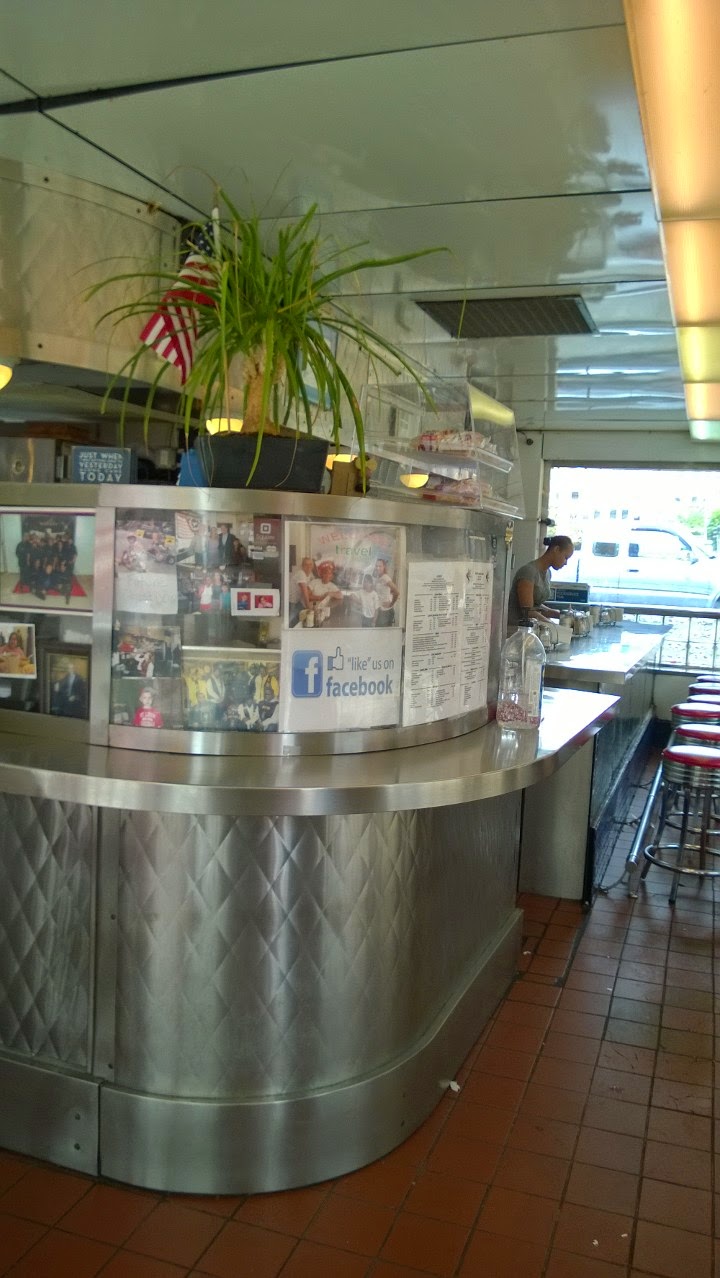 Inside is a lot of stainless steel and just what you'd expect in a diner. A flattop grill and a deep fryer. I had a burger and fries and Hubs had a turkey melt sandwich, The food was fine, plain old diner food. Nothing special-It's like eating at McDonald's except on plates.The down side was the place was so dirty! I mean the floor was dirty, the window sills were dirty, the whole place just felt gritty.  Anyways, the plates were clean so we ate and left...none too soon for me, but it was Hub's choice. So that's all the actual restaurants we ate at the rest of the tie we snacked....at the zoo, at Trader Joe's, at the hotel. 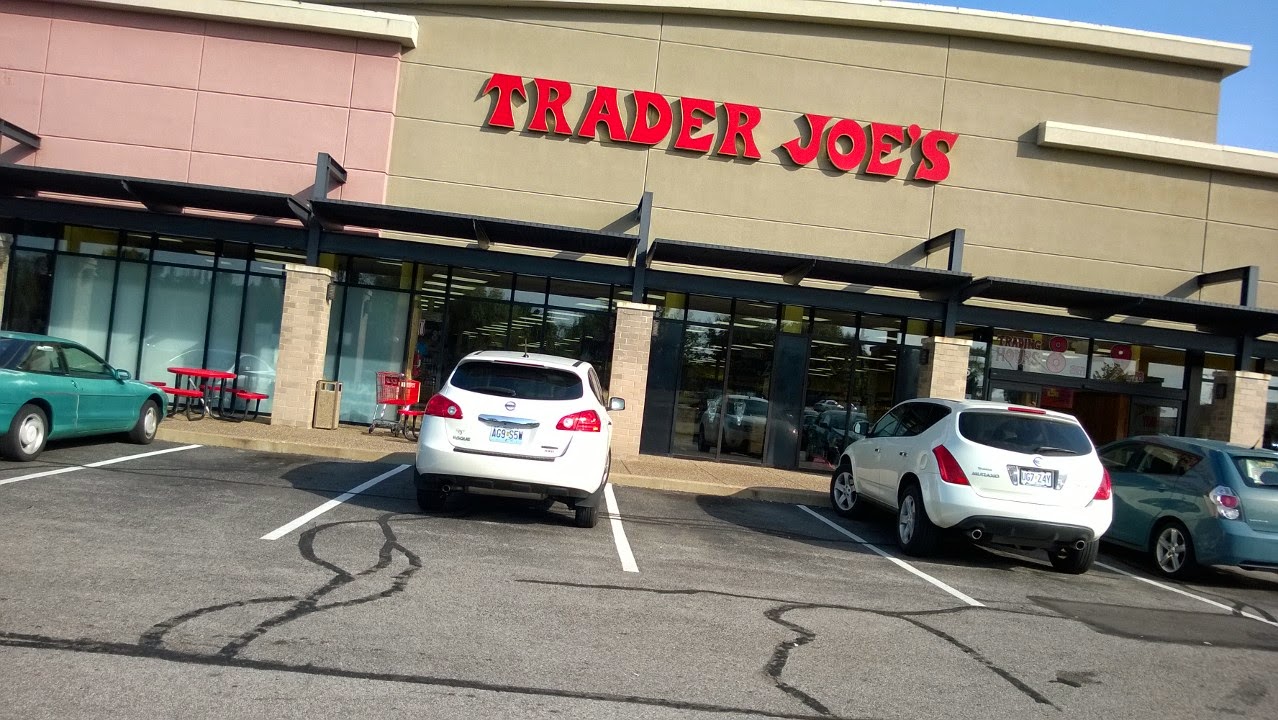 If you've never been to Trader Joe's it's an all natural, clean eating kind of grocery store. The thing is EVERTHING is Trader Joe's brand. 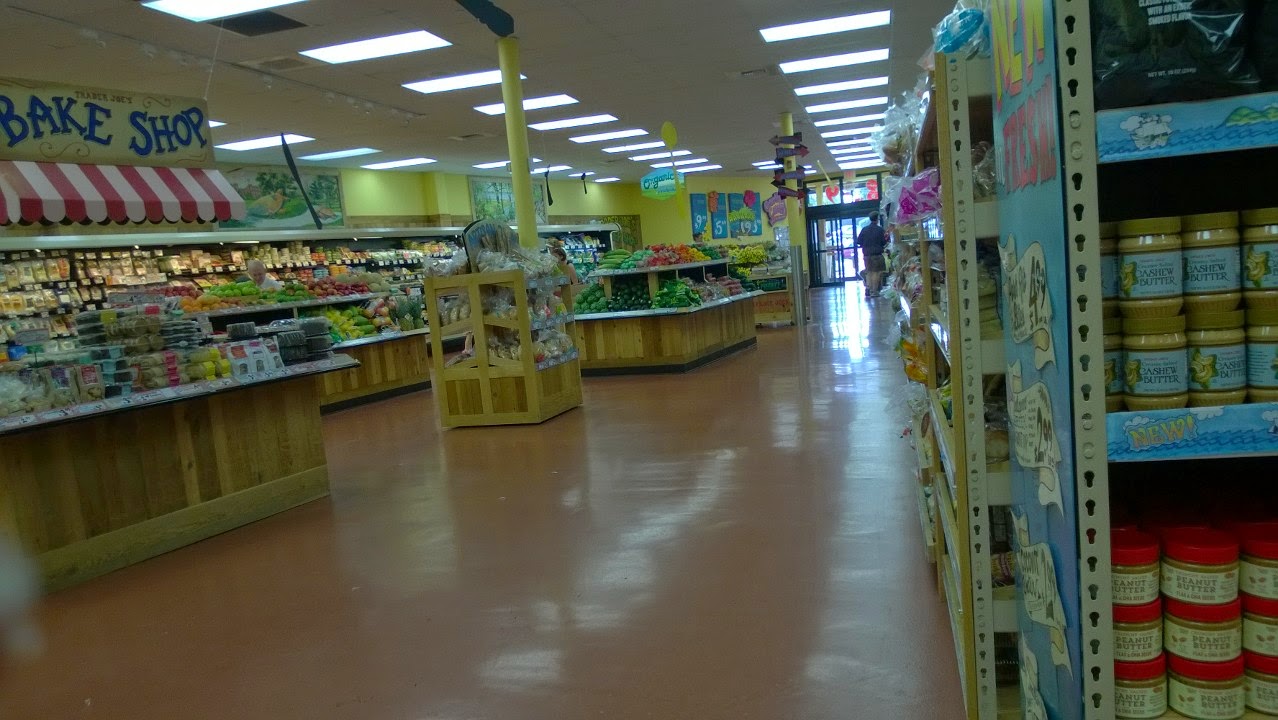 Yes everything, I bought lip balm, and milk and cookies and a bag of clementines and they are all Trader Joe brand. 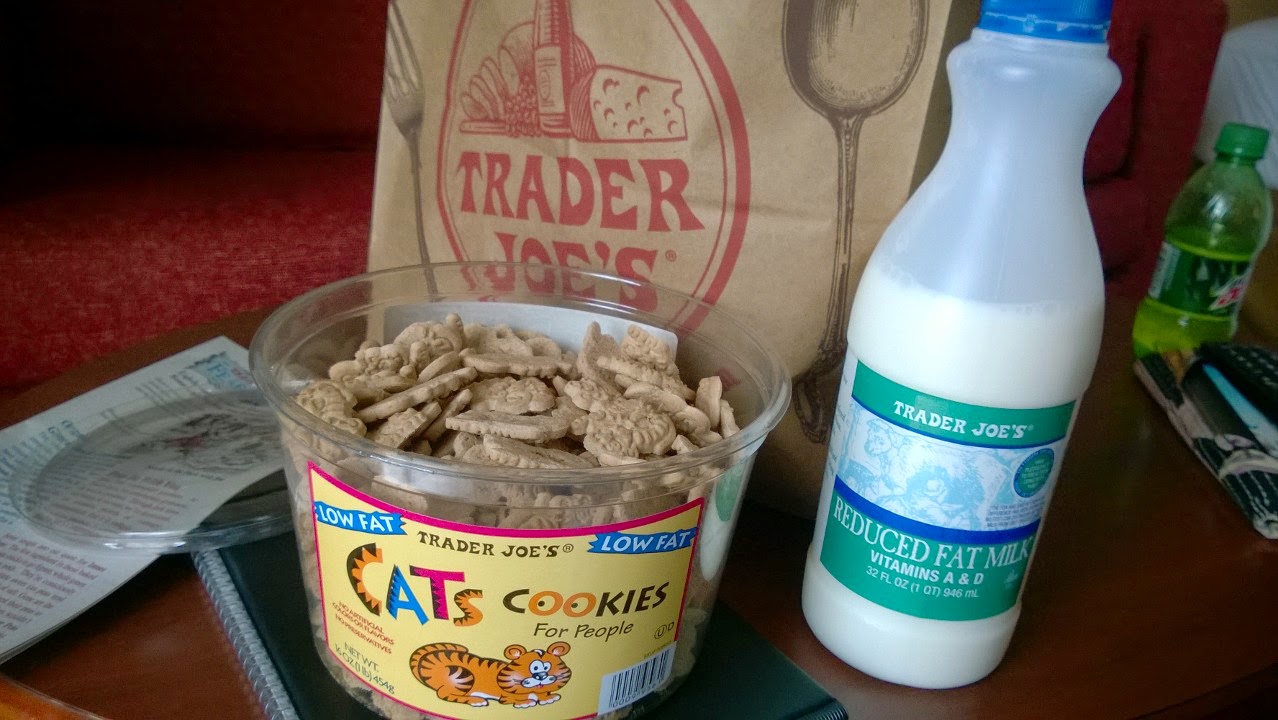 Eating in the city is always such a fun adventure, I think I'll stick to making the restaurant choices form now on though.

Posted by knuckstermom at 7:00 AM

Great post on "And We Ate...". As a professional chef i have to appreciate your work. Keep Posting useful posts like this. Keep in touch with my websites- chocolate making program | baking classes dubai