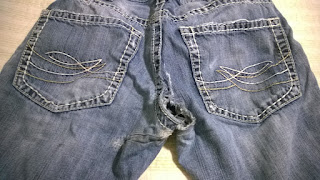 So, I love a good fitting comfortable pair of jeans as much as the next person, But..this guy...he takes it to another level. These are his favorite jeans, so I told him I'd try, but it wouldn't be pretty. The rear is torn out 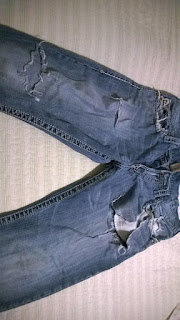 the front is torn out..there's not much left intact here..... 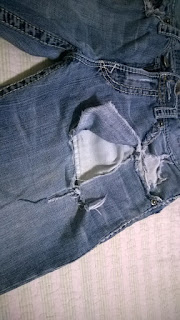 First I patch the rear....just put a scrap on behind the jeans, and stitch it in place adding reinforcements along the sides. 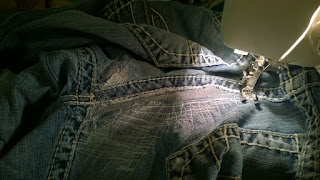 that shaped up as good as it could-there's no way I know to make this kind of damage invisible..LOL! 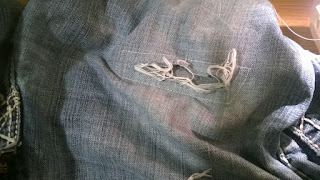 Now that front pocket area....I think I'll ad some stylish thick white stitching on the front of this patch. Kind of make it blend in with the fancy stitching on these jeans. SO I patch it from the back. 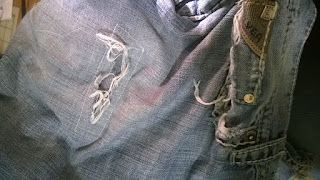 I didn't tuck under the edges on this one...and then fix the knee too. 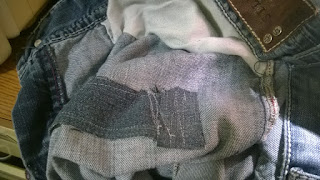 Then I load my bobbin with some embroidery floss and stitch in a giant zig zag...just to be stylish, ya know. 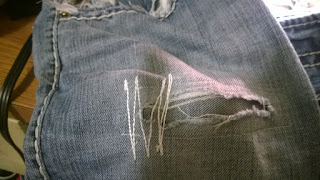 Hey! Looks like he bought them that way, right? And after mending the giant hole on the other pocket area, I added some giant white stitches to it too. 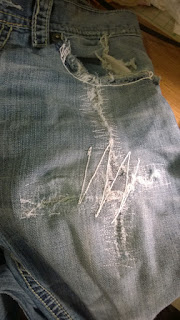 I am always amazed that folks will pay for jeans with holes already in them...brand new, with holes! I just shake my head and say "I can fix that for you." DD always turns me down though...go figure. 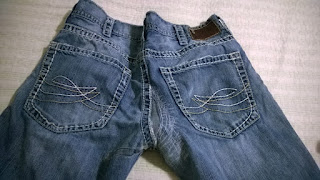 SO all done! Not too bad looking..there's only so much that can be done with something like this. 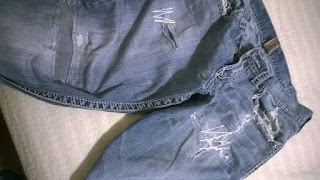 But at least he won't be exposing himself!
Posted by knuckstermom at 9:12 AM