When you visit Dubuque, Iowa, you'll notice it's built up the side of a bluff. Steep streets are the norm. 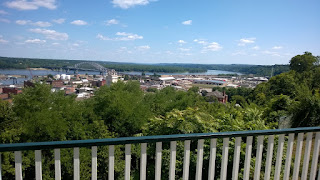 So we had to go try out the Fenlon Elevator. Here's the background about it.
In 1882, Dubuque was an hour and a half town - at noon everything shut down for an hour and a half when everyone went home to dinner. Mr. J. K. Graves, a former mayor, former State Senator, also promoter of mines and a banker lived on top of the bluffs and worked at the bottom. Unfortunately, he had to spend half an hour driving his horse and buggy round the bluff to get to the top and another half an hour to return downtown, even though his bank was only two and a half blocks away.
Mr. Graves liked to take half an hour for his dinner, then a half an hour nap, but this was impossible because of the long buggy ride.
As a traveler he had seen incline railways in Europe and decided that a cable car would solve his problem. He petitioned the city for the right to build. The franchise was granted on June 5, 1882.
John Bell, a local engineer, was hired to design and to build a one-car cable modeled after those in the Alps.The original cable car, which was built for Mr. Graves' private use, had a plain wood building, that housed a coal-fired steam engine boiler and winch. A wooden Swiss-style car was hauled up and down on two rails by a hemp rope.Mr. Graves' cable car operated for the first time on July 25, 1882. After that, he had his gardener let him down in the morning, bring him up at noon, down after dinner and nap, and up again at the end of the work day. Before long, the neighbors began meeting him at the elevator asking for rides.On July 19, 1884, the elevator burned when the fire that was banked in the stove for the night was blown alive. After Mr. Graves rebuilt the elevator, he remembered how his neighbors showed up when he used the cable car and he decided to open it to the public. He charged five cents a ride. 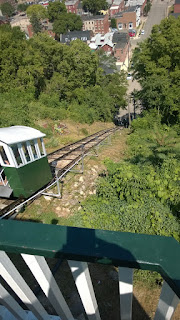 Here's the view from the top! WOW! They say you can see three states from here. 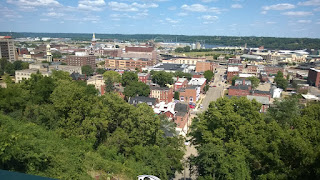 It costs $3 for a round trip on the elevator. It's almost worth that just to walk through this cool turnstile! 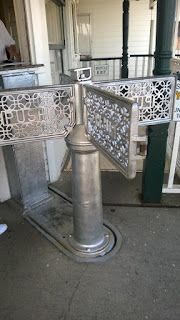 The cable car is just a small wood car with steps which is where you sit for the trip. The car is pretty cozy-room for 8 would be pretty snug. 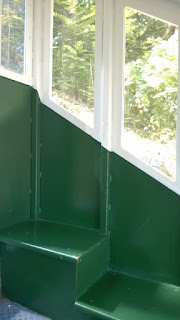 But the trip is very fun! What a view and if you are cable nervous-it's probably not for you! 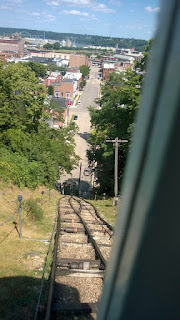 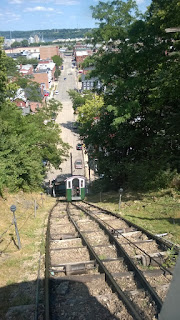 Here comes the car coming  up as we go down. 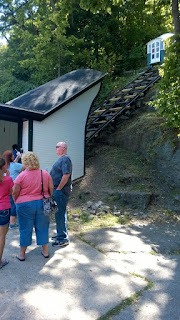 And at the bottom you can go visit some shops and come back for the ride up. 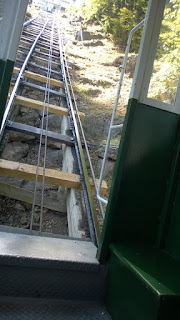 Here we go up up up! 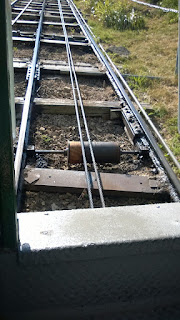 See those wooden spools that serve as cable carriers.  It was very fun and takes just a few minutes. I would think that back in 1884 it was quite an attraction! Imagine the squeaking hemp rope...no thanks! 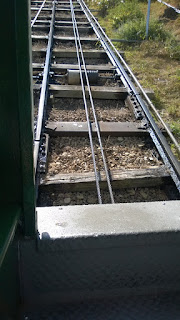 So our next stop was St Luke's Methodist Church. They have Tiffany windows. And you can actually touch them! 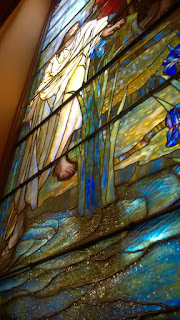 The church is pretty fabulous and they keep a person on Staff to show the windows every day. Our guide told us all about the windows, but just looking at them is so awe inspiring. The color of the glass is like nothing I've ever seen before. 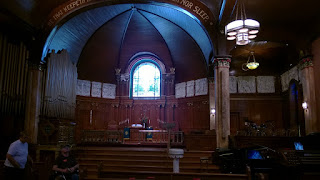 This one of the Angel among lilies above the alter wouldn't photograph well because of the sunlight, but it is beautiful. I don't know how I missed getting a good picture of the ceiling, but it's all quarter sawn oak, and has a really pretty rosette in the center. The wood ceiling is just beautiful. 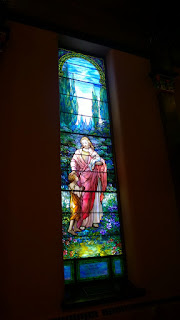 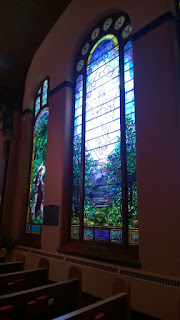 In addition to the picture windows, they have a whole wall of sliding doors with Tiffany glass windows too. This glass is also beautiful in a whole different way! 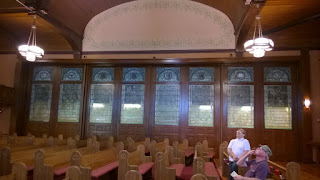 You can kind of get an idea of how big these windows are...see hubs and our guide. 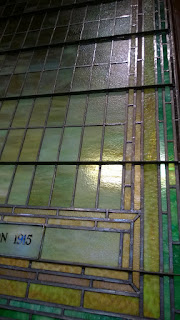 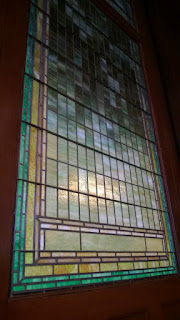 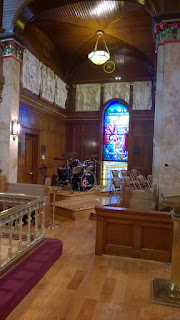 T
To the right of the alter is also one of several Tiffany light fixtures in addition to a really lovely window. 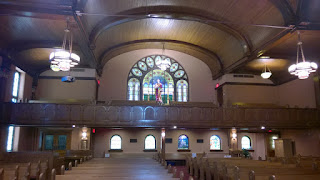 At the back of the church in the balcony is the Job window. They say it is the unknown author of the Book of Job. The eye shaped windows above him are really amazing. And those are Tiffany lights on either side in the balcony. 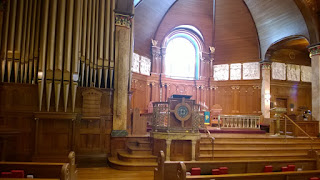 I tried to get a different angle to see the angel window, but it wasn't happening. But you can see the pipes of their big organ. Here's what it says in the pamphlet they hand out..."in 1992 over $200,000 was given in a single day by church members and friends for the complete restoration of the organ, as well as add air conditioning to the church."
Can you imagine $200K in one day!?!?!?! 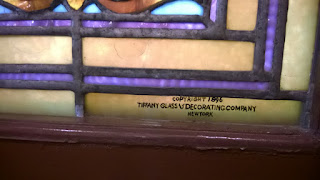 Here's a close up of the glass, there's a signature or a stamp like this on every one of the windows. 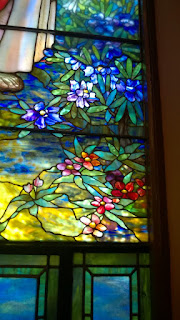 Aren't the colors just lovely? I wouldn't be bored on Sunday mornings with these windows to look at!! 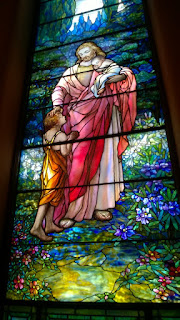 And that's the vacation for this year! Unless I can drag Hubs away for another day trip!LOL! 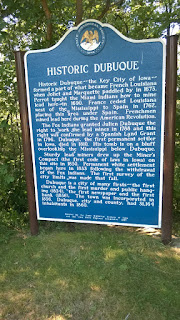 Posted by knuckstermom at 10:16 AM