SO I was happily doing a  load of laundry when I heard a lack of sound from my happy little laundry area. Never a good thing when things get too quiet. And there is was, no tumbling dyer. 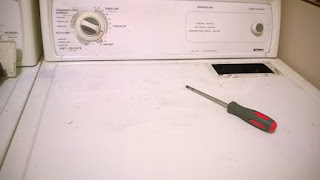 SO I did a quick search on you tube and gee, it's not too hard to dis assemble a dryer-look I just unscrewed the two screws on the lint trap opening, then pulled forward and up to lift the top up. 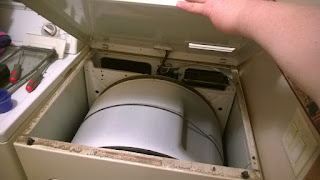 Then there are just two little screws to remove the front. TA-DA! And there's the broken belt. SO I stopped at Lowe's on the way to work and got a belt. It was only about 8 bucks! 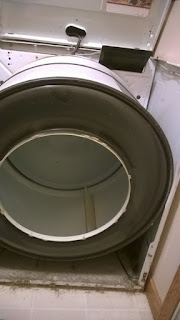 Ok Day two, I got up ready to dry! I couldn't figure out how the belt fit through the tensioner though, so off to you tube one more time. A lot of the dryers have a wheel for a tensioner but mine has just a little guide place. This Video on You Tube had the kind I have so I could get the belt on right. 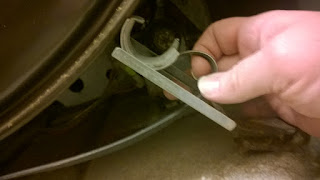 See how it kind of just loops through there? There! That's done. Now to re assemble! 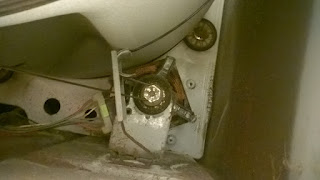 Getting the front back on was kind of tricky-it's hard to line up the two clips at the bottom while keeping the drum in place, but I got it done! The two screws back in place at the top...I'm so close to done! 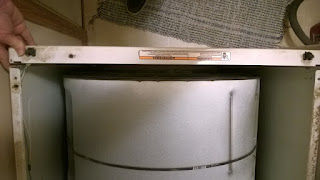 Now to put in the last two screws on the lint trap and I'm ready to dry! 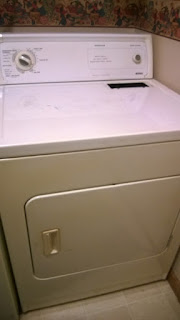 LAUNDRY IS GOING ON NOW!! That's a lot better than buying a new dryer, have you seen the prices on those things?