So in December we had a little trouble with the furnace-a new igniter had to be installed. $300 for the guy to come fix it. SO last week the furnace was acting up again. I called the guy we always call and they sent a rookie guy to try to fix it-it's only -12, gee who needs to have a furnace. Well Rookie couldn't get the thing going, so a 2nd guy came out-the guy who fixed it before. He finally got it going after sending rookie out to this truck so many times, I'm surprised there was anything left in it! So we're warm at least. He suggested we replace the furnace- to the tune of about $5000!!!! SO I got Hubs on the job and he called and had 4 or 5 different outfits come give him an estimate. 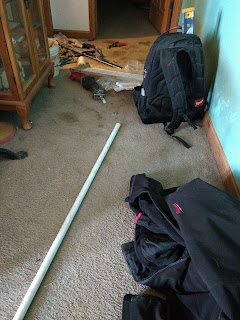 We chose to have Affordable Heating & Cooling come in and replace the furnace. On Tuesday they brought us a Lennox High Efficiency unit (they had to go pick it up over in Marshalltown!) and installed it for about $3000. Let the work begin!They could have used a little more space I think.  I took the dogs over to DD's for the day-no need for them to be helping. 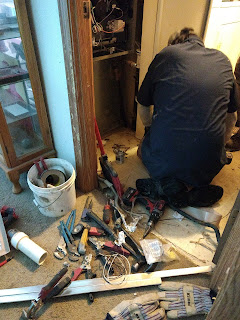 The guys from Affordable arrived on time, came in and got busy. By the time they finished it was down to about 65 degrees in the house. They took away the old unit and now we have this! They did a really great job-installed a new thermostat and cleaned up all their debris perfectly! 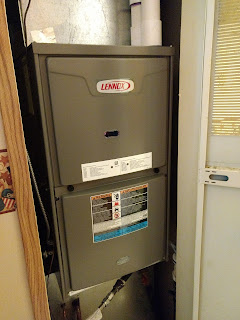 What a difference! It's quiet and seems to be working really well! We're all toasty now! I hope nothing else breaks down any time soon!
Posted by knuckstermom at 3:17 PM