A Day At The Fair 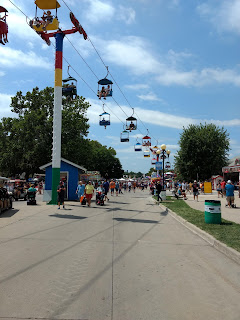 I have never been to the Iowa State Fair on the first day before. We've always gone later in the week. The weather was fabulous! It rained a little earlier, but it was bright and sunny when I got there. 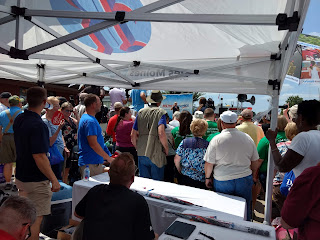 I got to see Joe Biden on the Des Moines Register "Soapbox". 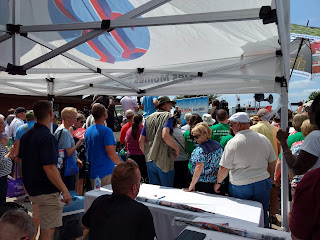 See, him? Up there in front? 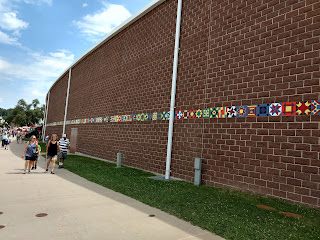 Then I stopped over at the 4H building, loved this idea for a T shirt quilt. 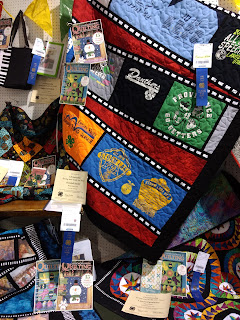 Kids these days are sure doing good work! 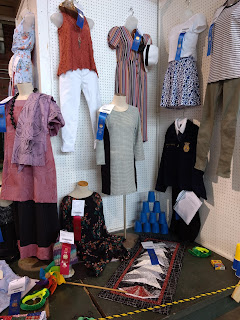 Then over to the Varied Industries building to see the needlework and textiles. 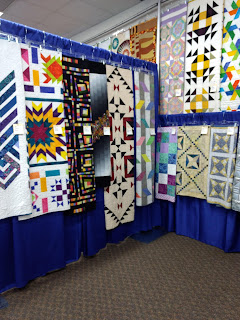 Lots of pretty quilts once again this year. Patrick Lose (he's a fabric & quilt designer) had a make and take that I was going to do, but I got there early and watched the group before me and the instructor was terrible! I thought she was mean! She made the participants feel dumb by asking if they knew why it was called a half square triangle? Well jeez you just had them make one-don't you think you'd be telling them that instead of asking them? I decided I didn't need that kind of instruction. Bye bye! 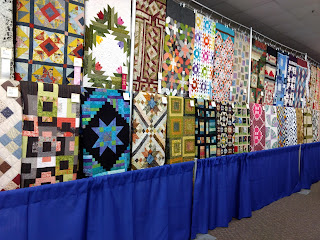 Downstairs the sewing for good folks were making quilts for use in the community. They give them to hospitals as well as Police & emergency responders to provide comfort to those in need. 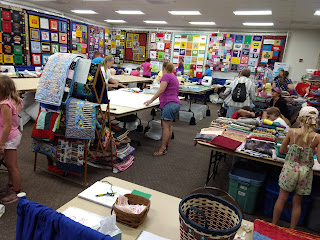 I stopped and painted a square on the giant paint by number-that's something that will be quite a mess by the end of the fair I bet. 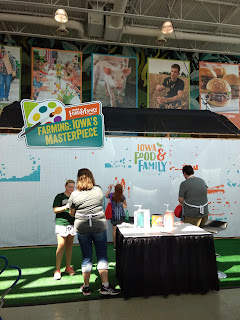 There is stuff everywhere for sale. Handmade stuff, weird stuff, 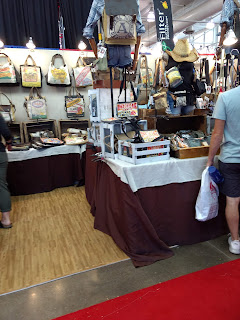 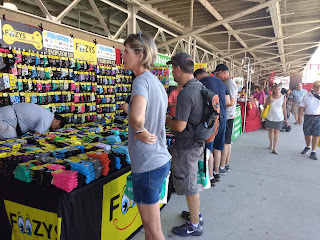 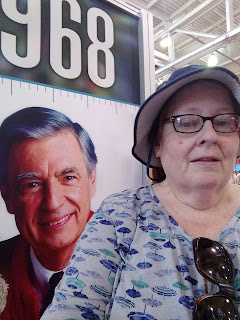 I visited with the IPTV folks-me and my pal Fred! Looks like he photo bombed me LOL


Hubs requested that I bring him home a turkey leg-I just wanted to point out to him that they coat $10. 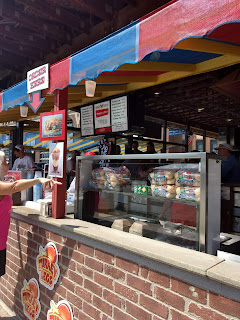 Here's one thing that is unique to the 1st day at the fair, the flowers look gorgeous! I have seen them later in the week in past years and they are sad. 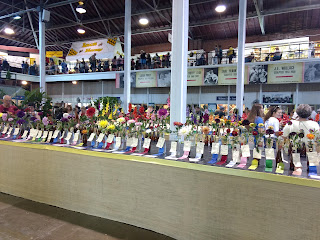 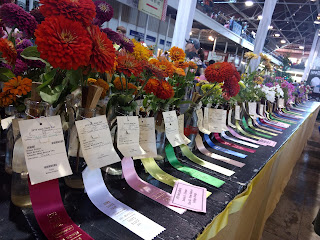 And then there's the butter cow and this year, Big Bird, Oscar and the Sesame Street folks. Just like any day, the line to see them was busy! 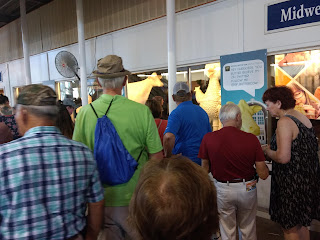 At the Cultural Center, they were making a giant painting. I went upstairs to see the exhibits and took this picture. I bet that's a hot mess later in the week. One thing about going on the first day of the fair, people who are working their booths are smiling and seem to be enjoying them selves-I know they don't feel that way on day 5,6,7,8,9 or 10! 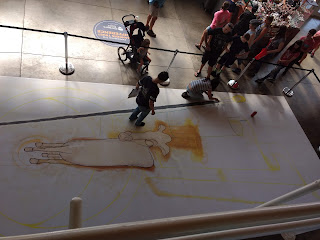 Then over to the cattle barn, it wouldn't be a fair with out some livestock. 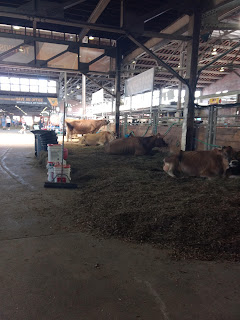 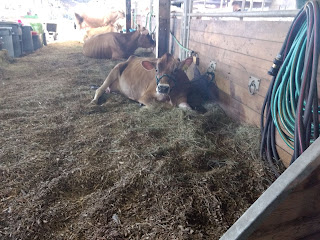 I did go see the sheep and the horses, and the hogs, but didn't snap pictures of all of them! 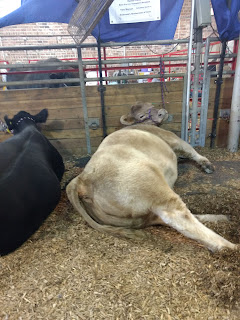 And I caught the Budweiser Clydesdales-they are so gorgeous! 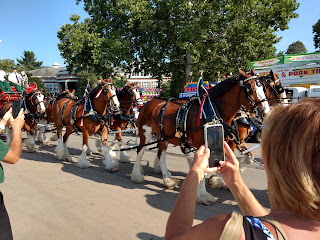 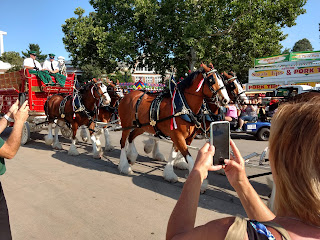 Then I claimed my seat at the Susan Knapp Amphitheater. Jason Brown, was on when I got there. Very good! 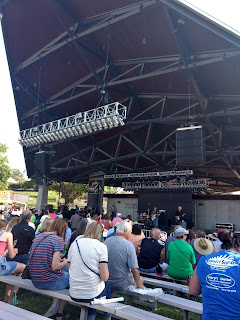 Then it was just waiting for Maddie Poppe. She was due to start at 8pm. She was just a few minutes late, and she packed the place! 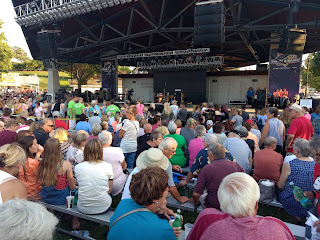 By show time the area was full! I'm glad I got my seat early! 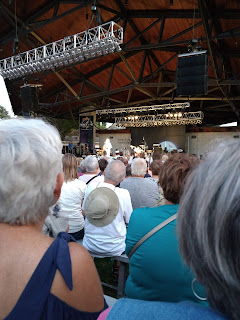 She played a wonderful array of music-the songs she sang that won her American Idol as well as some oldies that the crowd knew well. She chatted with the audience between songs and told little stories about her experiences with American Idol and growing up in Iowa. She mentioned she messed up her hair the night before, how much she enjoyed the  milkshakes at Chic-fil-a, and how she found a boyfriend on Idol-we all know she goes with Idol alum Caleb Lee Hutcheson- she seemed like a very normal 20 something and was entertaining to listen to. 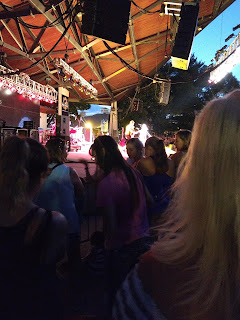 It was almost impossible to get a good picture though. Here's a nice one from Des Moines Register Photographer  Zach Boyden-Holmes. She looked very cute in her flowered jumpsuit-though I gotta say it looked like pajamas at first glance in the lighting. 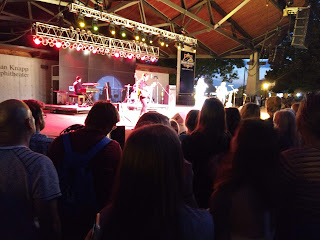 Maddie Poppe was a great way to finish the day at the fair.
Posted by knuckstermom at 9:00 AM