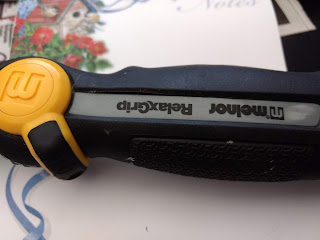 Well it sure seems like we're just falling apart around here! I went to water the tomato plants and the watering wand leaked water out the handle-more came from the leaking handle than came out the sprayer end! Sooo I emailed the Melnor company with my Amazon reciept from last year and this picture of the leaking place, 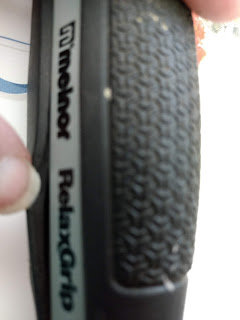 and LITTLE MIRACLE-they are sending me a new one! YAY for 2 year warranties!  The front storm door got badly bent a few weeks ago, so we ordered a new door from Menards. It took almost a moth to get here. 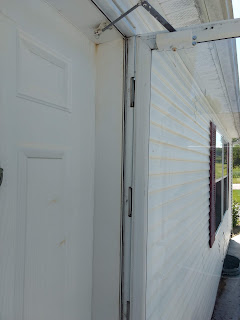 Then the guy we thought was going to come install it couldn't come, so we had to get another outfit in here to do it. I know, you're thinking, you could have done that job yourself...but I didn't want to. 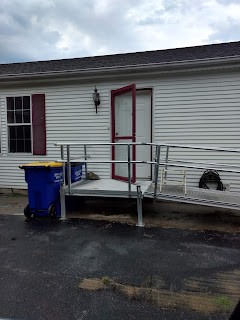 So, isn't it pretty! It matches the shutters and has a hidden roll up screen in the top. We also switched the side it opens on, making it easier to navigate Huibby's scooter or wheelchair when it's needed. 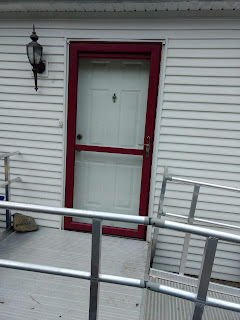 I need to move the door bell over to the other side now though! One more maintenance job to do! 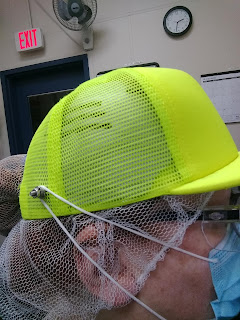 Hey, look at my invention at work! We have to wear bump hats, and a mask as well as ear plugs and hairnet too, and my head had enough stuff hanging off of it, so I got some tiny nuts and bolts from the storeroom and fixed my tired ears! That's a genius maintenance! 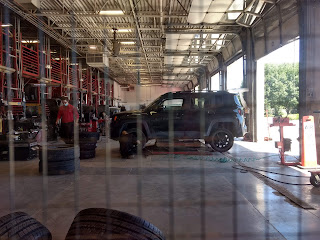 Dannie's Jeep needed some tires-she was having weird wobbles when driving so I took it in to get tires while she was at work. I had the folks at Discount Tires put on the same as she had before because that is what they had on hand a few weeks ago, and then decided we needed to get something different because they did not last as long as the warranty-supposed to be 60,000, and she had about 30,000. SO this week she dropped it off to get some better tires. We went with some Goodyears this time I hope they hold up better. The folks at Discount Tires are sure good about these things- no hassle at all, and I got a good price too! So that's done! 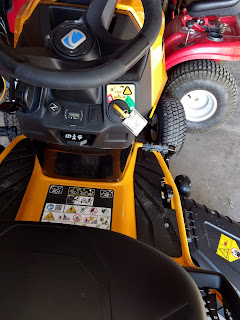 So we had another breakdown with the riding lawn mower, so Hubby said, he didn't want to put any more money into it and we should get  a new one, so we did. 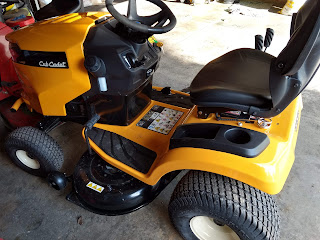 We looked at green ones at the John Deere dealer and went with the yellow Cub Cadet instead. Oddly enough, several dealers in our area were completely out of stock and were not optimistic about getting any in stock this season at all. 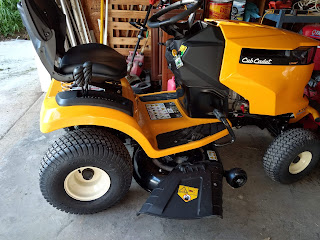 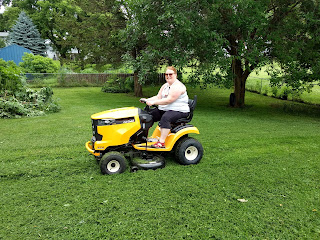 My gardener took it on it's first run today!  It does a nice job and runs very well.
I also had to tighten up the mailbox to it's post-I think the mail carrier bumps it once in awhile and it gets kind of wobbly. And the handle on the sliding patio door was getting loose, so I got it tightened up too. Too Much Maintenance!! And the last maintenance item was to replace the door knob on the front door. Hubby wanted one that looked more like the one on the storm door, so we got a latch style knob and Ben came over and installed it with a little help from his partner! Jaymie is a pretty handy kid! 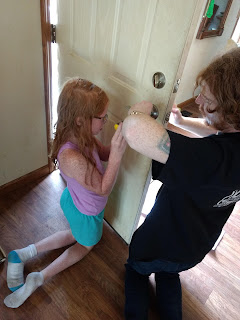 Well I hope that's all the maintenance I have to do for a little while! It's always something though isn't it?!
Posted by knuckstermom at 9:58 PM