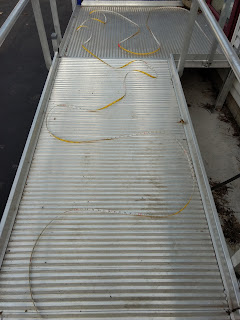 So, remember when I talked about this idea?
We have this 35' long ramp to enter our house. In the winter time it's like a ski slope. It's impossible to remove snow because there's a little edge all around it, plus, the texture of the aluminum is a nightmare! So I thought I would try something. I ordered a 60' heat tape-the kind that keeps your water line from freezing in the winter if you have above ground water service. 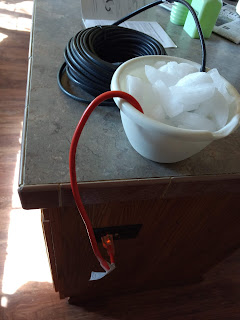 The package recommended that you test it to make sure it works, so I put the turn on sensor in a bowl of ice to see if it would turn on...yay! it did!! SO the idea is to stick the heat tape to the underside of the ramp so any snow, sleet or ice will melt. I called the manufacturer and asked about using the heat tape in this way-of course they said, "no ma'am, we don't support that application". Pooh. 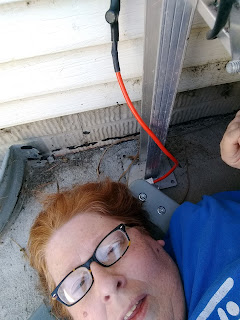 I got one of those scooter creeper carts so I could roll under there a little more easily-it works pretty good until you roll on your pony tail-then you stop right away!!! 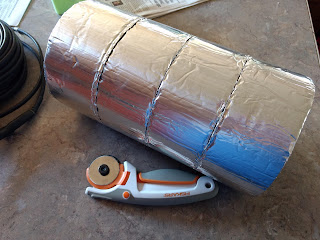 Here's what I'm using to stick it to the underside. It's that foam tape with aluminum on the outside. I could only find a wide roll. so I'm cutting it into narrower strips. Using my old rotary cutter! 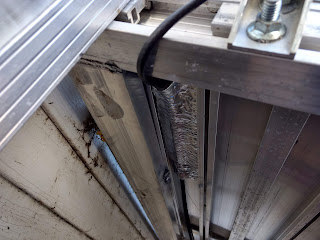 Here's the beginning. This is what the underside looks like. I left enough slack in the heat tape so it would reach the electrical outlet-see I planned! 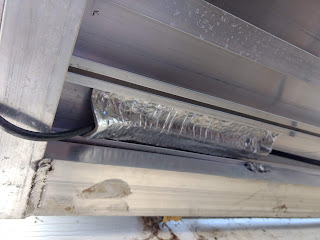 I didn't plan on the edges though. And there's a brace in the center-I'm not sure if I should go the full width of the top deck or half at a time..... 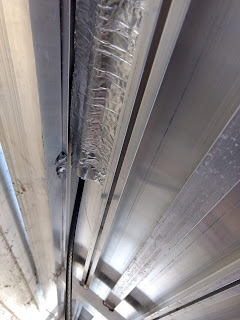 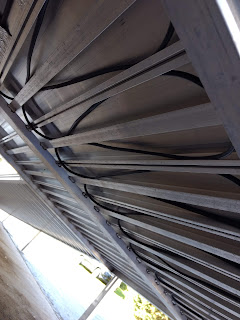 I poke the heat tape into the grooves-it stays in place pretty well while I rip off the tape and stick it on. 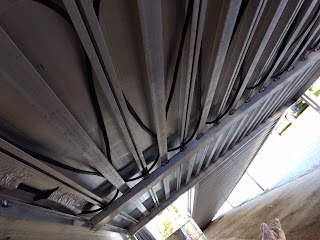 It takes a lot more heat tape than I thought!!! I did each half instead of going the full width. 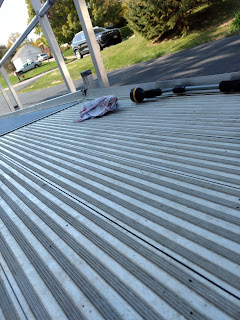 See this is the top side. I didn't know that each plank of aluminum had a big edge on the bottom side. 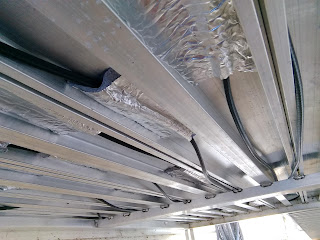 So here we go, once I get going it goes fairly quick. 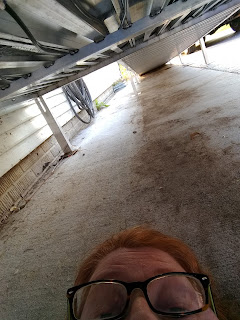 I'm not going to have enough heat tape to go down the ramp though. I had enough to fully cover the top platform area right outside the door though. 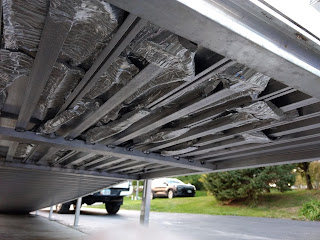 I used the entire roll of tape-cut into sections-to do this part. I'll need to buy another heat tape to do the rest, but I think this will make a good test! It snowed a few inches the other day-really early snow-and so I went out and plugged it in. And YAY! The snow was melted and the deck was dry! SO the heat tape is plugged in now and I'm waiting for a good snow!

Posted by knuckstermom at 4:46 PM